...Hyper Extended Midget Tour Show #12: Entertainment and Sports Arena, Raleigh, NC:
Today was day 2 of the attack of the nasty illness. While no new cases were reported, the afflicted trio of Rivers, Pat and the tour manager were still struggling with their flu-style symptoms. Pat woke up feeling really nasty, and asked to be excused from soundcheck so he could sleep. Luckily another drumming Patrick, the one from Ozma, filled in for Pat during soundcheck. The extra rest seemed to help Pat out a lot, and he was ready to turn in a solid set plus a bonus guitar wheedling during the post Surf Wax feedback insanity. Rivers was feeling somewhat better than yesterday overall, while the tour manager struggled thru the day. With luck no one else will get touched by the sickness, and the day off in warm (?) Tampa may do wonders to those coughing up nasty things...

...some quotes from fans' stories: the "floor ticket trouble" emerges...

"...I've been to four weezer shows in the past year, and this was amazing. Scott kicked ass. He gets better and better every time and last night, blew me away. As someone who, because of lack of musical ability can only appreciate talent, I was amazed and jealous. We knew he was good, but he was awesome last night. Rawk on Scott. Only minor problems with the arena, it was nuts, they wouldnt let anyone but those with floor tickets on the floor. We didnt even know you had to buy floor tickets. We all wanted to go down, but general admission meant seats not floor. It was the first time I had been forced to sit in seats, but we still rocked hard. We didnt do much sitting after Saves the Day came on stage...440 miles round trip for Weezer was completely worth it..." ---Kerri

"...Last night I went to see Weezer at the Raleigh Entertainment and Sports Arena and first off I have to say Weezer played an awesome show. The problem is that me and my friends waited literally 4 hours to and were the first people in the to the arena but when we were on our way down to the floor they turned us back because we didn't have "floor" tickets. Now where from what I believe general admission means first come first serve and apparently this is what other people believe. Apparently they didn't start selling floor tickets until the day before the show and the day of the show. This really made many people quite angry because we all bought our tickets like the first days they were for sale because we're all big fans of Ozma, Saves the Day, or Weezer. Instead people who waited til the last minute get to go to the floor which was really really wrong. I love Weezer and they played a kick ass show but this is one of the worst concerts I've been too as far as venue service...." ---Jeff

...also,many fans who were not in attendance at the show wrote in describing the 'message board party' of people who were watching the semi-live webcam pix coming in from the Sports Arena. Unfortunately the sound was either non existant or very limited depending on connection speed. Still, a cool bonus. 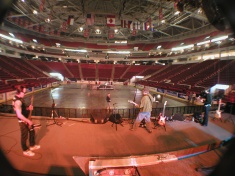 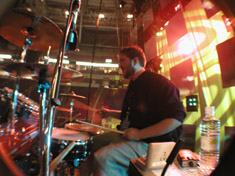 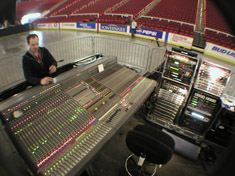 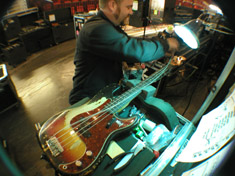 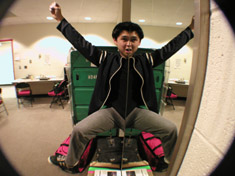 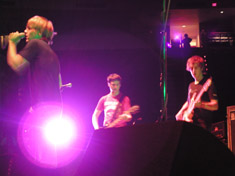 ...above center: our hero, Symmetry Lad; above right: Saves The Day... 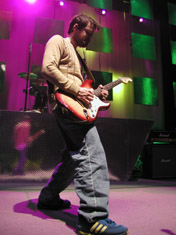 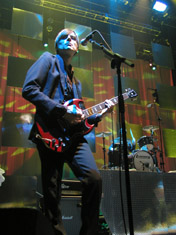 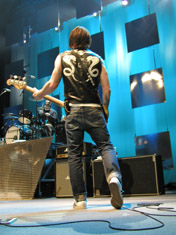 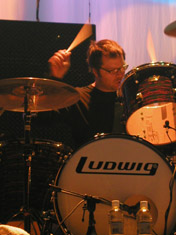 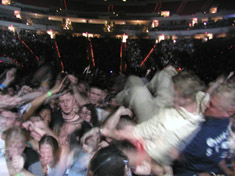 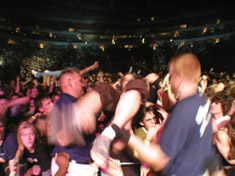 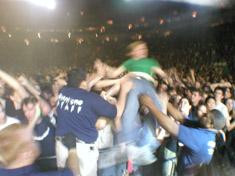 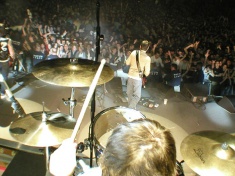 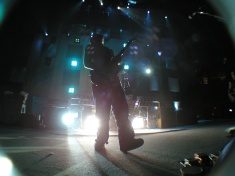 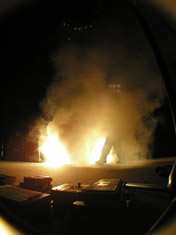 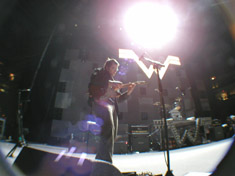 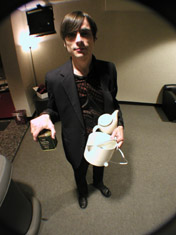 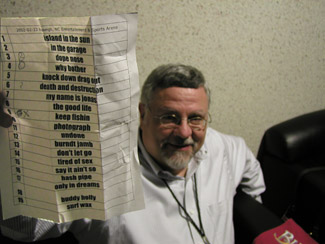