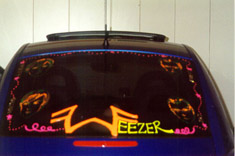 ...more weez-mobiles, from (L to R) Stella, Jessica, and Troy (none of whose mothers are upset)...

...day off in Tampa, where the much needed rain came in slow and steady. No runs to the mall, no walking around. Everyones laying low, either recovering from the nasty illness or (such as in my case), catching up on tons of work. It feels really odd to say that the tour's practically over! It feels like we're just getting in the swing of things here, but thats the nature of the beast- as soon as everyone gets used to being back on the road, the tour is over. This "Hyper" leg is a pretty short tour anyway. So we've got these 2 shows in Florida coming up, and then a quick flight to L.A. to play the sold out show in Long Beach with No Doubt and The Offspring... Then some recording and practicing in L.A., and then off to Europe!

...Here is a new article/interview about Rivers and Harvard U. Note: Rivers points out that there is a typo: "it was Professor Stewart, not Fisher."

...there are some more pix from the Continental Arena show at RollingStone.com. The link to the new photo gallery is at top right on their main page.

...interesting note re: the Raleigh Show "floor tickets controversy": a fan writes: "...the guys who complained about the entertainment and sports arena seating were all [misinformed]... All you had to do was ask some dude in guest services, and he would give you floor tickets for free. Just wait in line, show him your ticket, and he wraps this thing around your wrist. Noone saw anything about floor tickets when ordering because they were free."