...Monday was spent continuing the album #5 recording session. One track from yesterday was deemed sonicly problematic, so it got a brand new start today. And they started work on another brand new and another semi-older song as well. In the course of looking for an improved recording environment, the lights were turned down low and the gear was rearranged in a way that happened to make it a lot less interesting to photograph. However, the new arrangements suceeded in stoking everyone and improving the overall tones of the recording. 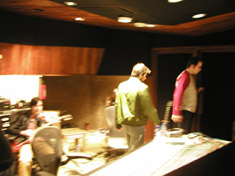 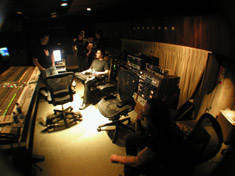 ...later, Pat was on a mission to find a copy of "Double Nickels On The Dime" by the Minutemen (one of the finest albums of all time), and we were sadly shut down at every retailer we tried. What a shame, everyone needs this CD! However, there was no trouble at all finding a nice LP of Tony Orlando and Dawn's Greatest Hits, not to mention a fine album by grade school punkers Old Skull.

...equipment buffs will want to take a peek at the Equipment History (in "info") for some minor updates including keyboard stuff. As always, there is more to come there!

...at californiamusicawards.com, weezer and drummer Pat Wilson are up for several awards. Help the guys win some California Music Awards! You can vote for them on the website.