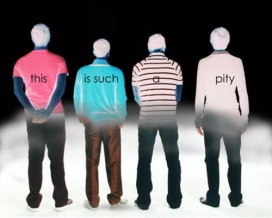 ...New interview alerts:
Rivers has done an interview with Spin magazine, it will be appearing in the May issue.
Rivers also recently did an interview for CBC (Canada's public radio), for a show called “Definitely Not the Opera”, hosted by Sook-Yin Lee (ex of MuchMusic fame, doer of many things and a figure in a certain indie comic book some years back). The show will be broadcast across Canada on Saturday March 18 between 1:00 P and 4:30 P (same time in every time zone). A live stream will also be available on www.cbc.ca, and the show will also be broadcast on Sirius Satellite Radio 137 at 11:05 AM (starts before the Canadian broadcast), as well as Public Radio International, but we don't know what time on PRI yet.
Rivers is also doing an interview for the Boston Globe soon, as well as an interview for Buddhist Magazine. We don't know yet when these will be published.
And yet another Rivers interview is set to appear in the upcoming Spring issue of Integral Yoga Magazine.

...coming soon to the online store: 'Weeze/r' t-shirts as seen in the "Perfect Situation" video!

...theres a Ringside show coming up on 3/17 at The Troubador in L.A., and our very own Brian Bell is sitting in on guitar duties. Brian has stayed in touch with the Ringside men Steve and Bathazar since they opened for Weezer last summer, and they asked him to help out.

..."This Is Such A Pity" is out now, the 4th single from "Make Believe"! Request it at your local station (assuming you live in a place that still has a station that might play weezer - where have the greats gone? Well, request it and they may play it - no matter what their 'format'. It can't hurt to try!) Thank you for your support!

As for a video, we dont have any word on whether there will be a 'Pity' video or not yet.

...Hey Domingo! Check out this new indie label run by Todd Sullivan, the man who wisely signed weezer to Geffen Records back in the day. Todd's stayed in the music biz game and his new label is releasing an excellent new album by Moth on 3/21.