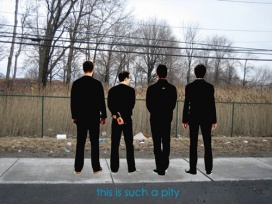 ...a few random notes as winter clings on past its official expiration date:

...This Is Such A Pity has started it's slow creep up the charts, thanks in part to your requests. Ironically, The tenacity of "Perfect Situation" on the modern rock chart (still #11 this week) is creating weez-to-weez competition for "Pity". But its never bad to have 2 songs on the chart at once. Hell, even 'Beverly Hills' is still lurking around somewhere down there, a full year after its release!

...there have been a lot of unsolicited unofficial videos made by fans for weezer songs over the years, and today theres a new one, courtesy of fan Rafael S. As "This Is Such A Pity" has no official video and we are uncertain if it will or not at this time, it's nice of Rafael to whip up a homegrown version. It's VERY funny and cool, check it out!

...keen eyed Weezer fans have spotted this article, with a breif summary of the BIG Rivers news thats come from his flurry of recent interviews with mostly Boston area publications and Buhddist mags, and continues with the upcoming May issue of Spin mag. And check out fansite weerez.com for audio of the very interesting recent CBC radio interview with Rivers.

...info hounds take note, the first 14 pages of the Recording History have finally gotten the updates and corrections theyve been due. The long awaited page 15 will join them soon, as soon as the data has been compiled and proofread. Also the Contact/F.A.Q. page has been updated twice in the last month and now addresses many nagging questions related to 'Make Believe' and other things. All part of the 'clean sweep' we're trying to do on weezer.com to update and fix what's been hurtin' for the last year or so.

...Y100, the online Philly modern rock station that was wrenched off the regular airwaves some time back but refuses to give in, is hosting its annual March Madness Tournament. Weezer has won more years than any other band (besides Green Day possibly??), including in 2005! With your votes, we can do it again! Rock on.

...To those trying to log in or sign up on the JONAS street team page - JONAS has been put into hibernation mode until its time to gear up and battle for the weez again. Thanks to all for their help in '05!

...random hard-core weez fan plug department: If you are in Florida, check out the indie suspense/drama film INSIDE which will be screening at the upcoming FLORIDA FILM FESTIVAL. You can see a trailer here. It ain't Weez related but it is made by a hard core weez fan! See it on March 26th at 9:15PM and March 30th at 6PM, at the REGAL WINTER PARK VILLAGE 510 N. Orlando Ave. Winter Park, FLLLL. Bonus: attend either INSIDE screening, bring in your ticket stub to PARK AVENUE CDs in Orlando, and get entered into a raffle to win a $100.00 gift certificate.

...and finally - the 'treat you are owed' (frankly its too late to keep calling it the 'holiday treat) has *not* been forgotten. The burner on the digital stove is on, the pan is heated. Im sorting thru ingredients to see what will/can be in your omlette, and hoping that the diner can open soon. Still no real idea when that will be, but anything is possible. This has been your mixed metaphor of the day.