Today was a travel day, we rode the Eurostar train thru the Chunnel to Paris France, for 2 days of interviews, photos shoots, and a TV appearence on something suspiciously called 'Hit Machine'. The last time the band was in Paris was last summer, for the show that has the distinction for being the hottest weezer show of all time, with a venue that had no windows, usable doors, ventilation or air conditioning, during one of the worst heat waves in Paris history. This time the weather is much much easier to handle, and Paris is as beautiful as ever.

Before heading to Paris, Rivers and Pat stopped by the BBC to do an interview with DJ Steve Lamaq for later broadcast. Pat characterized the interview as "...breif...and cordial." 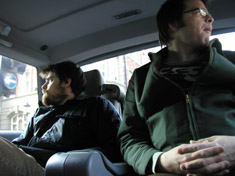 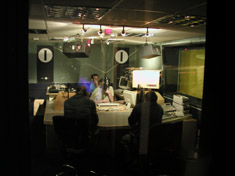 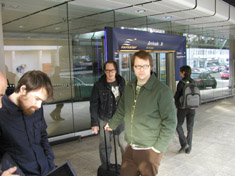 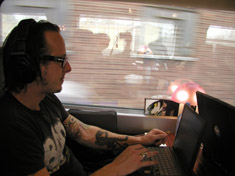 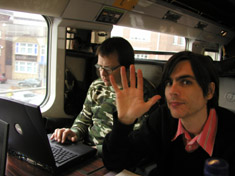 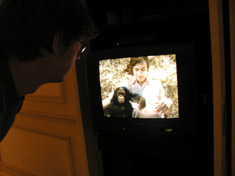 ...Rolling Stone sez (regarding the year 1995) "...The music scene was full of open possibilities that are now zipped tighter then Jessica Simpson's Lycra cat suit. Brit pop, trip-hop, drum-and-bass, indie rock and zines were exploding. Half-famous bands such as Elastica, Rancid, and Stereolab could get airplay without having to cover up their personalities. But today, after the disastrous Telecommunications Act of 1996, the phenomenon of half-famous bands has disappeared, and with it, so has cool rock on the radio. Unless you count that quintessential 1995 band, Weezer."