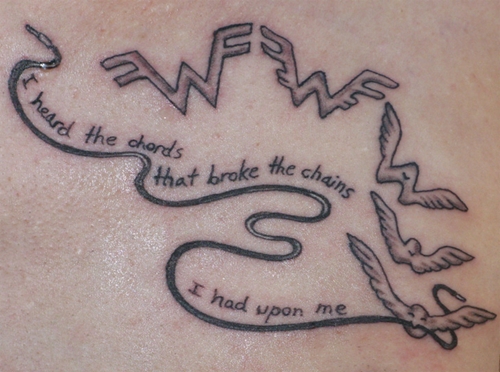 UPDATE 4/9
Hey check out Rivers' YouTube Channel and/or Weezer's YouTube channel for a wicked behind the scenes video of the recording of Rivers doing "What If God Was One Of Us" with Joe LoPiccio and Rainn Wilson for the upcoming Sirius Radio takeover show!

...Coming up in just a few days is the Rivers and Jason Schwartzman takeover on Sirius Radio's Alt-Nation channel. Here's the details:

In conjunction with this, there are as many as 7 (? tbd) cool Rivers/Jason/Rainn Wilson related video clips that will be hitting online around the time of the show. Good behind the scenes action. We'll update you with when/where details as they come in. Pitchfork coverage; Rolling Stone coverage.

...Update on the Rivers "Not Alone" hootenanny style live CD, and full show DVD, recorded last December at an in-store at Fingerprints Records in Long Beach. These items will be available at most if not all independant music stores, as well as the Fingerprints online store (preorder CD, DVD) and junketboy.com. Due out on on April 28th.

...Red Album Deluxe Edition on vinyl finally available!
We had to wait out the winter for this one, but its now available at select outlets. This 2 LP set contains the full 14 song USA Deluxe Edition tracklist, mastered especially for vinyl and pressed by the experts at RTI. The vinyl is 180 gram virgin wax, and by spreading the tracklist over 2 LPs we have maxed out the hi-fidelity possibilities. In other words, these suckers sound nice. The packaging is deluxe too, with a heavy cardboard gatefold jacket with a huge photo collage on the inside. the liner notes, more photos and credits are on plastered on the 2 full color inner sleeves. This pressing was limited to a little over 2000 copies, so if you like weezer and vinyl, now is the time to step up!

Red Album deluxe vinyl is avail online at: Insound, Interpunk, and Fingerprints. It will shortly also be on the UK site eil.com.

Honolulu, Hawaii: "Goat Punishment" (tribute band, not "THE" GP) is playing April 11th and 25th. Lance says: "The reception in Hawaii has been phenomenal so far. Last night alone we had 200 people. The crowd really loves the flying W guitar I built.."

...6 degrees of Watchmen/Factory Girl/Weezer, from observant fan Sal: "In the movie "Watchmen" the character Nite Owl is portrayed by one Patrick Wilson. Now Weezer's Patrick Wilson played John Cale in Factory Girl. Lyrics from John Cale’s “Sanities” appear in the title and the end quote of Chapter XII of the Watchmen comic series: 'It would be a stronger world, a stronger loving world, to die in.'"

...todays photo is a cool tattoo somewhere on weez fan Will Sherburne.