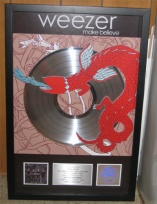 ...a new RC interview is coming shortly: The Harvard Crimson will be publishing an exclusive interview with Rivers, focusing on his decade-plus at Harvard and how that time/place have affected his work. It will see print in paper and online on Friday, April 28.

...Theres certainly been quite a few interviews with Rivers lately. But have you ever said to yourself, "theyre not asking him the right questions. If I could only ask Rivers Cuomo this one question..."? Rivers himself says he's been getting the feeling the "pros" arent asking what the fans want to know about. Well, now is your chance: Weezer.com is now assembling questions for a "fans only" web interview, and YOU could be part of it!

Heres how it works: Your questions will be gathered via email - but ONLY thru the link below. You may send in more than one question, but please - try your hardest to whittle it down to ONE great question. In the text portion of your email (where you write your question), include your name (ok if this is a screen name or nickname) and the name of your town or city (and country if you are not in the USA).

The deadline for questions is April 30 at 12 midnight! ANY question sent after that point will be AUTOMATICALLY DELETED and that's that. Once the questions are in, We'll be going thru them, picking out the most interesting ones, and eliminating "doubles" (where more than one person basically asked the same question - In those cases, everybody who asked it will be credited). Then the list will be assembled and Rivers will answer everything that makes the cut!

We dont know when yet, but at some point the finished interview will be published for all to see here on weezer.com. The names of those whose questions were used will be listed with each question in the interview. Now remember, you can ONLY use the link below to send in your question! If your email does not have the special header it gets from using the link below, it will be AUTOMATICALLY DELETED. Thanks for participating!

...Meanwhile, whoops! Well, it was fun while it lasted.

...Ready or not, Beverly Hills Marching Band music is now a reality.

...Though the JONAS Street Team is on hiatus for now, dedicated JONAS members have independently organized online at this forum. Check it out!

...the webmaster for The Weezer Picture Archive wants everyone to know: "I recently had to switch servers and lost a few photos, it would be wicked awesome if you could tell everyone that it is easy and free for anyone to make an account and upload photos! Right now there almost 600 images and I had over 800 before. Thanks, Michael"

...SS2K, the fan site devoted to the pre Green album "Summer Songs of 2000", has moved to this location.

...some sad news: Johnny Grunge, The former ECW wrestler that is referred to in the Weezer song "El Scorcho" (in the lyric "watching Grunge legdrop New Jack through a press table") has passed away, from breathing complications related to sleep apnea.

...Tribute band alert, UK: Weezish will be playing a one-off support set for Nirvana tribute "Newvana" on Satuurday 29th April at The Twist, 25 Military Road, Colchester, Essex, CO1 2AD, UK. It's £6 on the door or £5 with a ticket.