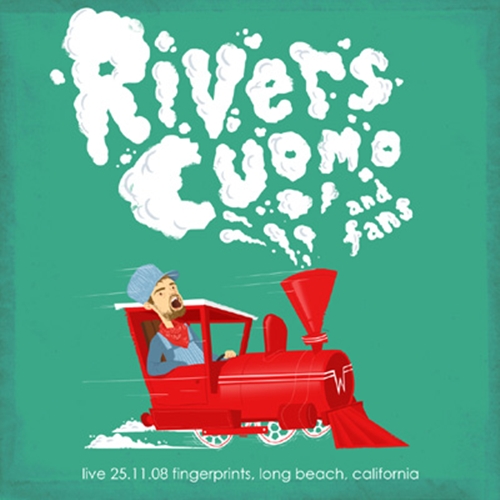 UPDATE 4/25
Hey, check out this video interview that just went up on Rainn Wilson's site, its Rainn Wilson asking Rivers some hard hitting and rather odd questions, very cool!

Hope your Earth days ended cleaner and more efficiently than they started. Here's the official word(s) from on high about the upcoming release of "Not Alone", the new Rivers EP + DVD. Includes link to new video of Rivers, er, exercising ...

Rivers Cuomo is pleased to announce the April 28th release 'Not Alone - Rivers Cuomo & Friends Live at Fingerprints' which will be available both as a DVD and as an EP. Not Alone has its origins in an in-store jam session Rivers Cuomo held at Fingerprints, a record store in Long Beach, CA. The event was a celebration for the release of 'Alone II - The Home Recordings Of Rivers Cuomo' on November 25, 2008. From a post on his website Rivers invited super fans from across the country to dress sharp and join him in a makeshift band. They helped pick a set list which ended up being a mix of Weezer classics as well as ultra-obscure fan favorites. The 150 lucky "friends" had never met or practiced together, but they fearlessly came to rock out with their favorite songs in what was a long, magical night.

Additional bonus footage on the DVD includes the video for "My Brain Is Working Overtime," an interview with actor Jason Schwartzman and this clip of Rivers speaking mere hours prior to the momentous in-store.

The CD features 6 songs from the in-store and an in-depth interview by NPR's Terry Gross from her show Fresh Air.

..."Not Alone" will be available at most if not all independant music stores, as well as the Fingerprints online store (preorder CD, DVD) and junketboy.com.

...Todays picture (imaginary "Not Alone" artwork) is by the very talented Headcheese. Take a bow, Headcheese.