05/03/02 The Singers and Songwriters Collection

...something cool is happening in Los Angeles on May 13th. Somehow, loud musical instruments will be played. If i was in Los Angeles and a weezer fan, I'd be listening to KROQ-FM. I'd also be keeping an eye on weezer.com. More to come!

...Yes, weezer is playing Leeds on Aug 24th, the day after their appearence at the reading Festival on the 23rd. Yes every band always signs up for playing both dates, this is true. Sorry about that omission the other day.

...now heres's some cool Maladroit news-
The first 600,000 US Maladroit CDs off the assembly line will be individually numbered from 000001 to 600000. This means that every copy of the initial pressing of the album will be unique! Record collectors and Beatles fans might remember how the original vinyl "White Album" LP jackets were numbered from 1 to a number somewhere in the millions before they stopped the process, and that years later, the lowest numbers eventually turned into collectors items. The Maladroit CD numbering is to be halted at 500,000 [or so I hear], so there should be a limited numbered cd available for everyone, at least for the time being anyway! Note that the cds are to be randomly distributed around the USA, so theres no way to know what number cd's will be in your local area. I guess we'll all find out come May 14th! 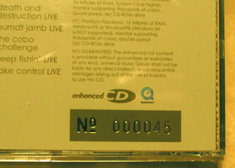 ..."Dope Nose" has risen to #8 in its 8th week on the Billboard Moden Rock chart! Thanks for your support!!!

...Here is the link for a cool March 2002 interview with Brian Bell, talking about Weezer, Maladroit, and Brians other music project, the Space Twins.