[a fan writes]"...A teenager from Derby, Kansas, just south of Wichita, was critically injured on the night the Witchita concert. His name is Zach Brown...[he] had a huge blast at the concert. He stayed in the pit throughout your whole set ...I saw him on the way out, and he looked like he had just had the time of his life--he even said about you guys: "Intense." I told him that it was going to be a sporty night as I hopped into my own car. That was about the last thing I've said to him that he probably understood. After dropping a girl off in Andover, he lost sight of the road in the storm and flew off of a highway entrance ramp and careened into the back of a semi, ripping the top off of his car. He is now in stable condition at Wesley Medical Center--with fluid in his lungs, swelling in his brain, and most of the bones in his face broken..." ...lets wish Zach all the best in his struggle- someone, start a thread on the message board to pass along our support!

...Dusty West Tour: Travel/Day Off: Albuquerque
Today was a day to relax (and catch up on work) in beautiful, mild weathered Albuquerque. The event of the day was going to see Spider-Man with Mr. Wilson. We both gave it 2 thumbs up, for a total of 4 thumbs. 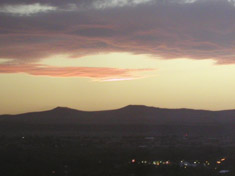 ...Maladroit rising: exclusives, events, and whatnot!