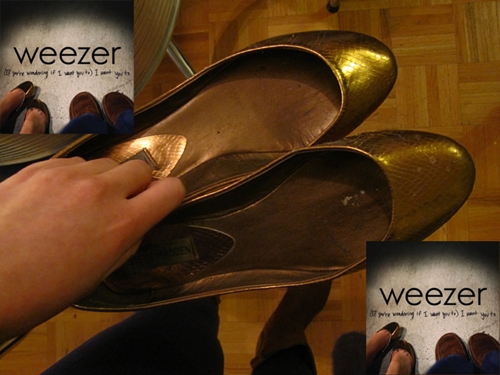 August 14th: The River Riot in Council Bluffs Iowa, with STP and more! On sale Saturday June 12th at 10am.

On Saturday, June 12, 2010, the U.S. will meet England in the World Cup for the first time since 1950. 60 years ago, the U.S. famously beat the British soccer powerhouse 1-0, in a game since dubbed “The Miracle on Grass.” In honor of the historic 2010 rematch, Weezer frontman Rivers Cuomo, a rabid soccer fan, has led the band to record an “unofficial” theme song for the U.S. team, titled “Represent.” Weezer’s A.P.E. Radio station, “Radio Weezer,” will begin to spin “Represent” at 9 am PDT on Friday, June 11th – the day before the U.S./England kickoff. The song will repeat frequently on the station to rally support for the team, and will be a free download on iTunes in the U.S. for one week starting at midnight on Friday, June 11th.

Rivers Cuomo and Weezer will be cheering on the team at the Bonnaroo Music and Arts Festival, where Weezer will be headlining over the weekend. The Grammy-winning frontman was quoted on MLSsoccer.com as saying, "They are actually playing the game on a big screen at the festival. So if you can believe it, I'll be sitting in front of that big screen with all the other concert-goers, watching the game. As soon as we realized we were going to confirm that show, we asked the promoter if they were going to be showing the game. They're actually making a big deal out of it."

...Hey this is very cool - the upcoming Weezer perfomance this Saturday at Bonnaroo will be broadcast on YouTube the next day, Sunday June 13th at 5:30 PM.

* The Asterisk is playing Friday June 11th at the Lit Lounge at 9pm in NYC "...which will be a huge pep rally for the US World Cup Team. Rivers' song "My Day is Coming" will be covered!"

* Tweezer (back again!), will be playing the Crossroads in Garwood, NJ June 11th.

...todays "yes its those shoes from the cover of the "I Want You To" single" picture courtesy of Kyla Whitnall from Toronto. "...One day last August, I went downtown in Toronto to RockWood for a friend's birthday, and at about 1:45 in the morning, a friend and I were sitting on the side of the road eating some street meat when a strange man approached us. He had a camera and I think he introduced himself and then asked if we wouldn't mind if he took a few pictures of our feet. My friend thought he was some kind of nighttime creep with a foot fetish, and said no, but I didn't think any harm could come of it, so I said okay. Well, after our little photoshoot, he told me that he was actually doing some photography for a new album that was coming out, and would I mind if he use the pictures. "Sure". "Okay, well will you sign these papers?" At which point he busted some crumpled papers out of his jacket and fumbled around for a pen. As I was reading the document, he said something along the lines of "the band is actually pretty famous, you might have heard of them, they're called Weezer"... of course I've heard of Weezer, come on!! So I signed it, but at this point, I was still thinking he might be a stalker with a foot fetish and some weird desire to have my autograph (so did my friend). Anyway, I didn't really believe that he was actually from Weezer, and I was a little drunk.... but sure enough, a few months later, I was looking through the pictures from that night on facebook, and I remembered this little encounter, and decided to look up weezer.com and sure enough! Woah, my feet are ACTUALLY on the cover a single!!! How random...
Anyway, I took a picture of my copper Steve Madden flats and attached it for some credible proof of the incident (sort of)..." -Kyla [ed note: the "strange man" was our manager, Daniel! heh heh. He's not so strange. Most of the time.]