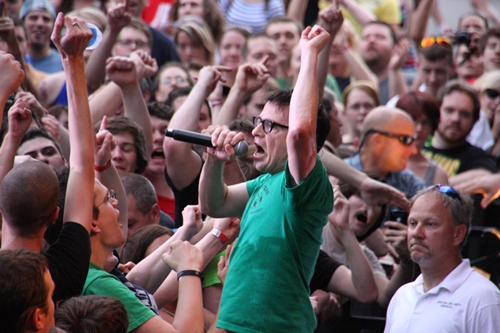 ...Well, we assembled our motley crue yesterday evening in Louisville (home of our fave mid-south record shop Ear X-Tacy, though we still miss Melanie!), and made our way over the river to the oddly situated Horseshoe Casino. Its sort of in the middle of nowhere, surrounded by deep woods, steep hills, and nature. And the casino is actually a boat on the river which is why it was legal to build...er, float. And were not actually playing on the boat, but rather in the parking lot nearby. And I swear, I can hear a banjo duel off in the woods somewhere! THIS IS ROCK.

Everyone was saying how today was their hottest day of the year so far... and to that I must reply with a cliche: it's not the heat, its the humidity! But yeah... it was the heat too. Brutal! But a fine rain-free day for outdoor rock, in the parking lot of a casino. The folks came primed to have some fun and blow off steam, and thats what happened. We had a guest singer dueting on "If Your're Wondering" with Rivers tonight, and dude could sing! Later I had to bust out some Germanic line dancing moves as Rivers dragged me to center stage during the particularly raucous "Kids". Its a good thing I took all those Germanic line dancing lessons back in Leipzig.

...REMINDER: The upcoming Weezer perfomance this Saturday at Bonnaroo will be broadcast on YouTube the next day, Sunday June 13th at 5:30 PM.