the second in a series of reports from our intrepid weezer sports reporter in Japan and Korea, where Rivers and a gang of fellow soccer enthusiasts have gathered to soak in the World Cup...

Monday (6/10) was the big match between S. Korea and the U.S.A. The anticipation for this game was incredible. There were commercials on T.V. about it every five minutes, and even the bellboys at our hotel were bugging the weez folk for tickets! The Koreans were dominating the first half, keeping the U.S. team on their toes, but [in the reporter's opinion] shooting poorly. But the terrain was tough, as Justin explained. Since it had been raining most of the morning the field was really wet and slippery. That didn’t seem to hinder the U.S. men, though, as they scored a powerful goal in the first half that brought the raucous Korean fans to a hush while the tiny U.S. contingent were on their feet cheering like crazy. During the second half, Korea finally scored another goal to bring the score to a tie that would persist to the end, so the game was a draw, tieing the U.S. and Korea in their group determining which team will advance to the next round. Neither team was at their best, though, which was kind of a bummer. After the game the crowd was still happy (both sides), but there was an air of disappointment looming, since neither team’s supporters could claim victory, and no one thought their team played up to par that day (bad weather, extremely intense pressure, etc). Tomorrow its back to Seoul for the remainder of the first round. 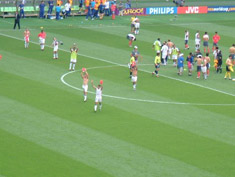 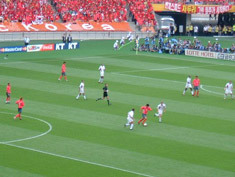 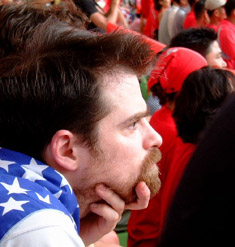 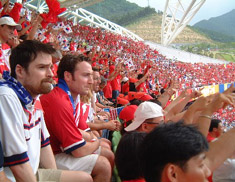