...though Rivers has claimed at times to not beleive in birthdays, This sentence is dedicated to his own, which is today. Have a good one, bro! (I think with this World Cup action, he got himself the best birthday gift possible!)

the third in a series of reports from our intrepid weezer sports reporter in Japan and Korea, where Rivers and a gang of fellow soccer enthusiasts have gathered to soak in the World Cup...

On Tuesday 6/11, Rivers and friends went back to good ol’ O’Kim’s (after Rivers purchased yet another suit) to watch the game between Cameroon and Germany. It was another great match, with Germany emerging triumphant and securing their position to advance to the Round of 16. Several times during the match, the players from opposing teams came frighteningly close to throwing punches, with a lot of forehead-to-forehead stare downs. This made the game all the more entertaining to watch, especially when the German goalie was all up in the face of one of the Cameroon players, and we could all read his lips, saying "What’s up! What’s up!" just like a Gangsta. Yellow Card city.

Rivers and co. weren’t set on either team winning, as long as one of them did (i.e. not a draw), because they were hoping Ireland would advance. The Ireland game was played simultaneously, and they ended up winning, so everyone was happy that Ireland made it to the next round. During half time, it was back to the ever present foosball table.

After the game, they returned to the foosball table and were challenged by some other patrons of the bar. A quick wroted Englishman teamed with Todd, Vs. Rivers and Ivan. Rivers’ team was SHUT OUT! The Englishman was a secret weapon! (He turned out to be a very friendly whiskey salesman.) 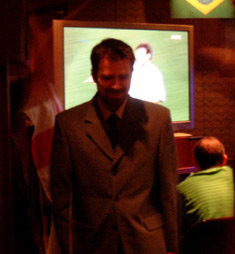 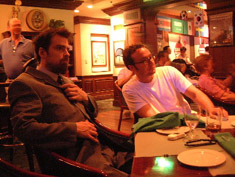 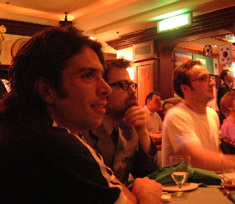 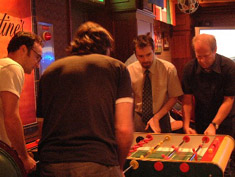 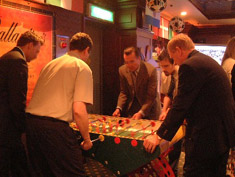 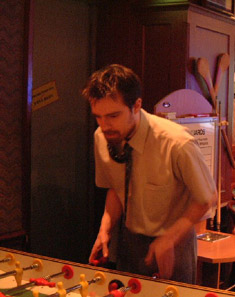