"The video was so insane and cool that it's only starting to sink in..." --Pat Wilson 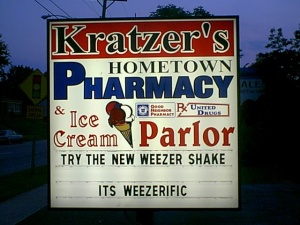 Head out and get yourself one!
a tasty creation from Wilmington Ohio, courtesy Kratzer's employee Mark.

...after a long day on Wednesday shooting the "storyline" parts of the "Keep Fishin'" video, the guys went into the studio today to begin pre-production for album 5. What is pre-production you might ask? Well, basically its like recording the album, except you arent officially recording it yet. The guys have really been doing this on and off for album 5 since before "Maladroit" was even released, with several nice demos coming out of it, some of which were released on the a-v page. Now its time to really sort out what tracks they want to take to completion. Rivers has continued writing more songs in the meantime, so he is bound to show them to the band, bringing the potential number of Album 5 tracks well above the approximately 20 that have been worked on to date.

One thing the guys are keeping in mind is that they will likely be using a producer this time out, so when they get down to brass tacks in the fall after a summer of touring, they want to be totally ready to go, with the songs chosen and the gameplan sorted out. These 2 weeks leading up to the Enlightenment Tour are designed to get questions answered.

One question is whether any additional instrumentation will be used on the album this time out. The guys have invited a guest musician, on keyboards, to come in for these 2 weeks and experiment with the band on songs both already demo'd and brand new. There are no specific plans for the keyboard parts, rather, they are excited to just see what happens.