The flow continues as more songs were recorded and worked on. Mr. Keyboard man came in early to lay down some new parts on previous goodies "The Victor", "Mo Beats" and "Private Message". The rest of the guys then came in a little later to hear what he had done and also worked on some new songs. The reaction seemed pretty positive to the parts but this is all still in the beginning stages so it will be interesting to see how it all turns out. They then revisited "Hey Domingo" and "Running Man" again but also worked on another brand newie "Lullaby" as well as "Reason to Worry" by Pat and "Birthday Booty" by Brian. 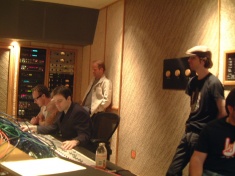 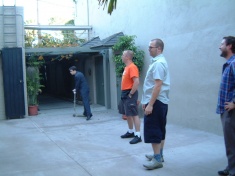 ..."Keep Fishin'" on the cusp!
Weezer's second single from Maladroit, "Keep Fishin'" is officialy going to radio on the 25th (this coming Tuesday!), but several stations are already "on the scene" early! Listeners of KROQ Los Angeles, 101 in Chicago, 107.1 The End Seattle, and KROCK 92.3 New York City are encouraged to request Keep Fishin' as much as they can, if they want to hear it! Now, as I understand it, the rest of the country has supposedly not been given the single just yet...but from the reports I've been getting in, that hasn't stopped a lot of stations from playing all the Keep Fishin' they want! For example...

NEW: These pictures were not part of the original post. They were provided exclusively for Weezerpedia by Karl Koch. 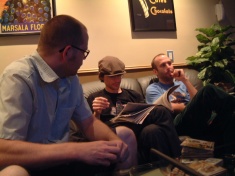 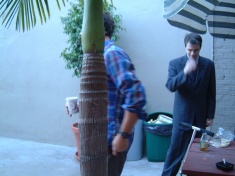 [click on any photo for a larger size version]