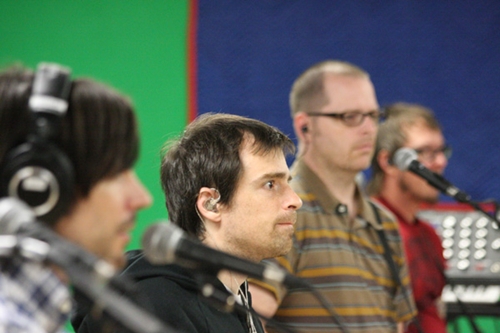 ...By now you've hopefully checked out the latest video of Weezer doing their unique cover of MGMT's "Kids" with the Lady Gaga "Pokerface" disco party section mixed in just as you have demanded. The video footage was culled from the KROQ Weenie Roast and T-Mobile Party live performances back in May, and assembled in chaotic fashion on a laptop undergoing nuclear meltdown by yours truly.

...If youve been checking out our Twitter feed, youve been recently treated with some exclusive pix shot by myself and others throughout the recording sessions between last November and now. More of these Pix for the Twit are coming.

..."wait, recording sessions?" you may ask. Yes, recording sessions. The bands 7th album, title TBA, is pretty close to a wrap now (after a mild false alarm back in the spring), though there is some work yet remaining to be done. There have also been some other special weezer studio recordings done recently, but more on that later.

...For right now, the band has been preparing for next weeks short but sweet jaunt to Asia, namely the huge Jisan Valley Rock Festival in Korea, and the utterly colossal FujiRock Festival in Japan. The guys including new recruit Josh Freese have been working hard, whipping the show into shape for the big stage. Weezer rolls on in '09, despite anything the haters, hatters and hatteurs might say!

...summary of whats in the weezer pipeline in the coming months:
* Weezer's 7th studio album, release date and title to be announced
* 1st single and video from the new album
* a to-be-announced special non-physical release
* weezer APE online radio station (as announced recently)
* Pinkerton: The Deluxe Edition (at last - if all goes as planned)
* more good things!

...A side note to anyone who is on the Weezer mailing list that has had trouble recieving the e-mail updates - the tech folks tell me they have discovered a heretofore hidden glitch in the database software that they have now corrected. They say this should clear up any remaining issues with people not getting the emails. If you are still experiencing any troubles in the future, drop me a line and let me know.

* Now, look. If you haven't been paying attention, youve got to check this out: The Rentals have released a great new EP: "Chapter Two | It's Time To Come Home", the second installment of their 'Songs About Time' album. The Rentals are helmed by Matt Sharp, original (1992-1998) bass player for Weezer, and they are half way thru an extraordinary year long recording journey, where every day is documented, every week a short film is made, and 4 times a year the fruits of their recording labors are posted for listening/purchase, till the album is completed and released as a wicked box set. Is anyone else in music doing this? I think not. You really need to do yourself a favor and check out the music, films and photos over on TheRentals.com. Ive been really digging it myself, as are a lot of people who have taken a minute to discover whats going on there.

* RollingStone.com has included Rivers in their Rock-A-Likes Slideshow where they compare contemporary rockers to classic rock and roll icons. Check it out here to see who they matched Rivers Cuomo to.

* Upcoming new Sugar Ray album "Music For Cougars" includes their cover of a song recorded but never released by Weezer, "Love Is The Answer". The original Weezer version of the song remains in the Make Believe era vaults, but now Sugar Ray's version will be available as of July 21, when their album drops.

* Also on July 21, Guitar Center releases a free CD called "Fresh Cuts Vol. 4", available at Guitar Center stores. This compilation CD features a previously unreleased Weezer recording, the late 2000 pre-production band demo of "Everybody Go Away", a song which was tried out for the Green Album but didnt make it to the sessions for Green. The album also features "She'd Be Good For Me", a song by by original ('92-'93) weezer member Jason Cropper.

* Also on July 20th, a very cool Weezer tribute album is being released: "Weezer: The 8-Bit Album" will be available from http://www.ptesquad.com. "The album consists of Weezer covers composed using original 8-bit videogame hardware (Game Boys, Commodore 64s etc) by the brightest stars of this rather niche scene - guaranteed to be unlike any other Weezer tribute record you may have heard before."

* Tribute Band Alert: El Scorcho special show When: Sun Jul 19 09 05:00 PM
Where: 5 Spot, 1123 Euclid Avenue NE, Atlanta, GA, 30307, US
Details: A very special evening with El Scorcho and Friends!
Braxton O'Neal, Max Forstater, and Mike Kane will perform their original songs acoustically in a "writer's round" format.
Then, hear progressive hip-hop from Transistor Fist.
Next, check out the awesome rock of The Whiskey Theory.
Finally, stay for the one and only El Scorcho performing rarities and specials!
It's only $5, all-ages, non-smoking, young children are welcome, and the place has a great vibe.