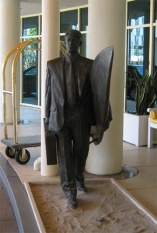 ...So, drummer man Patrick Wilson has been posting up a storm these days over on thespecialgoodness.com. Go check it oot, and read his take on the ways and means commitee's findings.

...*UPDATE 7/22* Kudos to weerez.com for hepping us all to a 'new' interview we thought had been nixed. Fortunately its finally out (or its finally been found), and as it turns out, its one of the best of the recent "Spring season o' many Rivers interviews".

...There should be a new original video clip up shortly in the media section. Its been uploaded, Im just waiting for it to be encoded into the system, a process that sometimes takes a few days and that I cannot control. Hopefully you'll like it. It aint "the" treat, but we havent had any new video stuff to look at in a long time, so something had to give.

...still waiting on more info re: a live dvd. Not to mention a greatest hits album, and Brian Bells latest musical efforts. It seems we are in a limbo-like state - for now.

...The Rivers interview with Sook-Yin Lee on the CBC "Definitely Not the Opera" radio show was available as a podcast for a while, but then it was taken down. BUT, its now back up for your enjoyment. This was one of the more interesting and enlightening interviews from Rivers this year, and it can now be yours at the click of a mouse. Available here, (or on iTunes), till mid September. (Thanks to Joff at CBC)

...We arent sure just how many babies have been named after Weezer songs (or members), but we know they exist. This cute li'l latest example was sent in by Jason K. "His name is Jonas Evan K., born 20 Feb 06. He will one day despise the song, but till then..."

...Large size picture of the statue of a man taking his board to work and thus remaining afloat: here.