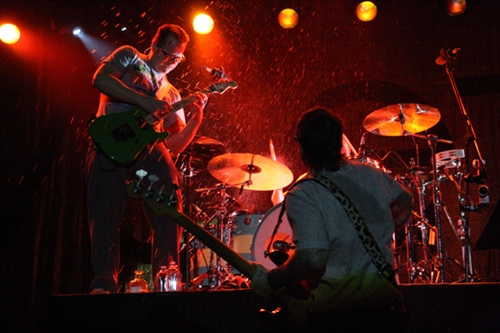 ...We rolled into the charming city of St. John's two days ago and settled into some R+R mixed with catching up on work. People said this was a friendly city and they weren't kidding! That combined with the picturesque harbor views, dynamite fish and chips, and the sightseeing ranging from rugged coastlines to whale watching has made for a great time so far. The good times are scheduled to continue this evening at the Mile One Centre, where the first ever Weezer St. John's rock show is going down. More later....

Another first tonight, with the St. John's fans finally getting their sip of the Weez live rock extravaganza, and holy cow, were they ever ready for it! Tonight is best described as an outstanding turbulent collision between the crowd's pent up energy and the bands sonic and visual assault. It was a real delight to finally bring weezer to this much-deserving corner of Canada, and the St. Johns peeps showed they know how to rock hard. Thank you Newfoundland, for your 1.5 hour time change, your whales, your Screech, your rugged terrain, your town called Dildo, your stellar fish and chips, and most of all for your friendship.