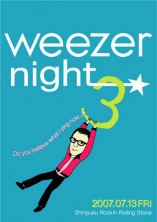 *update 10/6* NYC folks, theres a weezer cover band in your area now, going by the name o' Tweezer. Check 'em out this coming Wednesday 10/10 at The Lion's Den in NYC.

...first of all folks, there has been no change in the (cool) weezer situation in the studio - the news from 8/9 (below) is still the latest. If/when theres more to tell, it will be here.

But meanwhile, the random wide world o' weez keeps rolling along, and heres a roundup:

...In the 9/07 issue of Spin magazine, there's an interview with actor turned musician Michael Cera (the skinny one from "Superbad", etc) regarding his band "The Long Goodbye". Michael talks about Weezer being a big influence, saying that "My favorite album of all time is Weezer's Pinkerton". Meanwhile , Cera's band covers 'El Scorcho', and you can hear/see it on their MySpace page.

...Very cool fan action in Japan: Nami writes "We held an event called the weezer night in Shinjuku, Tokyo in July of this year. This event is the third this time. Around 100 people come to dance every time. The image is the poster (large size link here) which I sometimes made!! I made this! Is a face of Rivers similar."

...from an anonymous submitter, a spy photo from the Rock N' Roll Hall Of Fame. Now go to Cleveland and take the tour, and see how the Weez (and the original big light up "W" from '95) fits into Rock History.

...One for the old schoolers and new wavers: The Rentals, led by original Weezer bass player Matt sharp, have been out on tour for a while. On Sept 21 they finish their tour in L.A. at the Henry Ford Theater. The word is out that this tour has really been rocking, so be sure to come on down on 9/21. Info here. (By the way, see Rachel Haden talk a bit about the making of the Buddy Holly video in this YouTube video...amongst other things!)

...Finally, a cute weez baby alert (one of many in recent years actually). From São Paulo, Brazil, its Renato, a brand new devotee of weezer. Renato is the son of Fernando - who, coincidentally, also likes weezer. How about that.