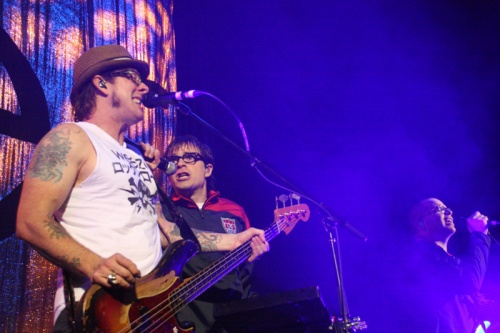 Back in the saddle... to rainy Kansas City. Blink-182 is all in one town again and the show must go on! Ok, first of all, the monsoons gave way to clear skies by the time weezer hit the stage, so that was a lucky break. Second of all, after 3 days of downtime, the band was rip roaring and ready to rock out. And thirdly, THE CROWD WAS OFF THE HOOK. I dont know what was going on with the Kansas City peeps but they went ballistic! Easily the most rip-snortingest ultra stokeingest (not to mention indecent exposurest!) crowd on the tour to date! One got the impression that there was either a severe drought of rock in the area till this tour rolled thru, or that people just go extra cookoo for cocoa puffs around these parts. Well, it really doesnt matter why - the end result was an EPIC night of rock for all!

Were you at this show? Post your show stories here.

...Check out Jillian's Blog - Scott Shiner's wife Jillian is blogging about her experiences on this tour as a new mother and rock tour wife. Good stuff!