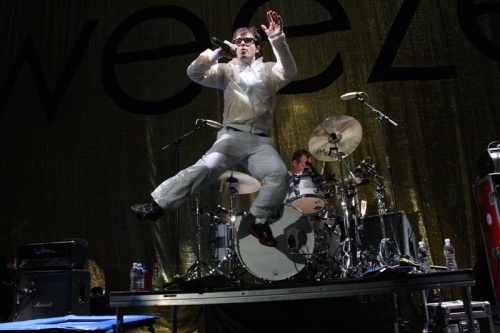 ...After a day off to acclimate to the mile high altitude, Weezer is ready for Denver. Is Denver ready for Weezer? I think Denver is always ready for Weezer, in their own particular smoothed out way. Unlike at leat 85% of all past Weezer Denver shows, this one was NOT at the Ogden Theater. Always feels a little funny to be doing Denver but not be there. For years Weezer didnt even know there was another place one could play here, because they never were booked at another place. Ah, but there are many places to play here of course, including the mighty Red Rocks and the Fiddlers Green of course. The contrast between the utter abandon of the Kansas City crowd and the more relaxed Denverites was pretty sharp, but the good rock spirit and mass singalongs were still there as always.

Earlier today Pat and Josh went to Channel 93.3, the alt rock station in Denver, to do a radio take over, 80's and 90's throwback style with the honorable DJ Nick Cage. It got pretty goofy in there to say the least! But the talk was tight and the tunes were strong (when the guys werent telling tales and getting weird), Nu Shooz? Yes. Devo? Yes. Pumpkins? Yes. Catherine Wheel? Yes. The Sundays? Yes.

Were you at this show? Post your show stories here.