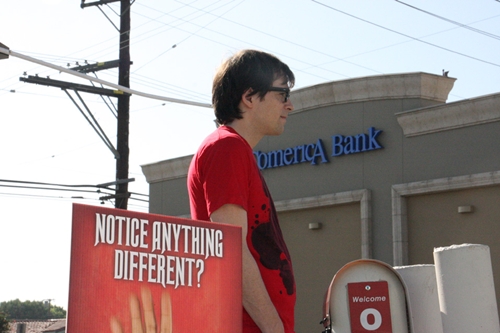 ...Well, you may have already noticed evidence of this elsewhere online, and it is official: "Raditude"'s release date has been moved ahead one week to November 3rd. There is a very specific timetable laid out for album releases and if any element misses a deadline even by a few hours, it throws the whole shebang ahead to the next week. Rarely does every little thing go exactly as planned, so here we are with a new release date. It happens. The good news is everything is looking solid from this point to the finish line.

...waiting on official word about the online presentation of the live secret show filmed at the Roxy on 9/21, presented by Guitar Hero 5 / Yahoo Music. Expecting it very soon.

***Special announcement - Shriner Big Rock Alert!
Scott is playing and singing in a special show this coming Saturday night (9/26) with an "all star band" including such luminaries as Duff McKagan from Gn'R and Dave Navarro of Jane's Addiction. This rock show, taking place at The Roxy Theater on Sunset Blvd, is a benefit show for Scott Ford, a good friend of Scott's who is battling cancer. Tickets available from The Roxy. Onstage time is 11:30 pm. Support is Jason Heath and the Greedy Souls and there will be an auction of special items including a guitar from Gibson that will be signed by all the artists performing. All proceeds go to help Scott Ford's medical bills.