"The other day my friend and I had this big arguement over what kind of music you play. He said that you played punk and I said you played rock. Please email me back with the correct answer." ---Patrick O. 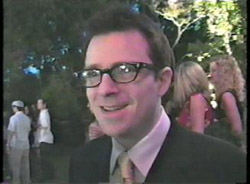 ...well, last night's Jackass premiere b-b-q special on Mtv was pretty funny, and as the ads indicated, included a touch of the Weez. Rivers got a bit of screen time, with the Jackass dude finally asking him for a hug, and Rivers' priceless reply: "Im not quick to bond... I'll shake your hand!" Its really too bad there wasnt more weezer action, as they did interview both Rivers and Pat for at least 10 minutes back on that night, but none of that showed up in the special. Well, there was a lot of action to pick from that night, what with the random head shavings, lawn furnature destruction and wrestling matches. Anyway, the world at least got a peek at what we got to watch that night, and what everyone [over the age of 17 unless attending with a parent or guardian] will see as of October 25th! "Jackass" will always hold a special place in the hearts of Weezer, as the guys go way back with "Johnny Knoxville" and head writer/old man impersonator Spike Jonze, not to mention Loomis [the narrator/referee guy], who we used to hang with all the way back when he was the drummer for Wax.
...Jackass. Sure, its gross, crude and stupid, but as they said on the special, it just might be the funniest movie of all time!
--Weez/Jackass update 10/18:
Turns out some of the Rivers/pat interview footage IS being used, on a current Mtv News story. "I was laughing so hard i was crying" -Pat. Also, some more info and a video clip of this interview is located on Mtv.com.

...some fan announcements + what not:

"...I'm hoping that SOMEONE sent you guys a picture of 6 freaks who wore green shirts that spelled "WEEZER" across them. This was way back on July 9th at Red Rocks. I've been trying to find anyone who took a picture (I was the "W") and get a copy of it from them. If you guys have a copy or know who might, I'd love to hear back from you. Thanks!" --- Jeff P. [we here at weezer.com never saw any such pic, so if anyone can help Jeff, drop him an email!]

...Weezerfest Cincinnati details:
Date: Saturday, October 19
Where: Newport on the Levee
When: 1:00 at the front gates (look for us holding up a flying w sign)
What: We're gonna either go to the aquarium or Gameworks, depending on what the majority would like to do, so bring cash!
Email littlegoob@lycos.com or purpleskyatdusk@hotmail.com for info, or PM wynd or elizabethann on the boards.