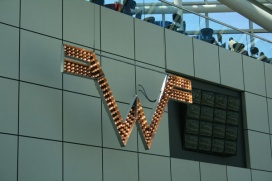 Album 6 is getting ready for mixing and I have never been so excited about a project in my life. Weezer fans truly have something to look forward to. The entire band has accomplished some of its most challenging goals as a group and as individuals. It's all coming together on this album.

To sum it up, at the beginning of the recording each member asked himself "what do you want out of this session?" The answer lies ahead.

...and more news: on 12/11, a new album titled "Alone: The Home Recordings of Rivers Cuomo" will be released on Geffen Records. The (very cool) tracklist, which was drawn from the full span of Rivers' Weezer years (1992-2007) is still under wraps, but Rivers recently spoke to Rolling Stone about the project. Also see this Pitchfork article, which also refers to the wicked cool book project that Rivers is working on, that will be released at a (much) later time.

...Speaking of Scott and the new (as-yet-untitled and TBD release date) Weezer album, heres an article (it's sort of an advertisement too) about some of the keyboards Scott and the band have been using recently.