...police blotter 2...
"...I sat here with my mouth hanging open when I read about the two vehicle break-ins. My Jeep Wrangler was violated also - during Raleigh's Oysterfest, 2 weeks ago. Though I keep my doors unlocked the idiots still slashed my side window. The idiots then jimmied open my center console and said idiots stole my CDs (including some beloved,irreplaceable burned Weezer CDs). However, I must be thankful enough that they left the face of my CD player safely on the floor board. Have I mentioned they were idiots? Anyway, maybe there's a Weezer burned CD movement going on underground and these are hot commodities...lesson? Always keep a backup at home tucked safely under your underwear." ---Jenn

"...Here's my funny little car break-in story: About a year ago somebody broke into my poor '83 Honda Accord and took almost all of the CD's I had in it, which were mostly Beatles, Bob Dylan, and chick folk-blues music. The only CDs they didn't take? Weezer's Green and Blue Albums. I thought it was kinda humorous. At least I know that my weezer CDs will be safe if I keep them in my car." ----Krystal (aka kp7vegan on bboards)

...end of an era... a cryptic message from "Sweet Billy" has given us some news about "The Amherst House", the Los Angeles house where Weezer lived and practiced before getting signed. This is where THE Garage is located, the one shown inside the Blue Album and in the Say It Aint So video. Ever since those days, the house has been rented by various musicians, so the Garage and house looks a lot like it used to even today. But all that's about to change, as the musical types are getting the boot and a complete renovation is slated for the house. "Sweet Billy" has tipped us off that there's going to be one last party at this house, and that any Weezer fan who wants to see this piece of weez history is invited to share in the magic before it evaporates forever! SO come on down this Saturday, Oct 26th, starting at 9PM. This is it! 2226 Amherst Avenue, West Los Angeles [its set back from the road, down the driveway past another house, looks like a "guest house" from the street]. disclaimer: weezer and weezer.com assumes no responsibility for any event of any kind that takes place in or near this house at any time. If you go, what goes on is your reponsibility!

...Weezer has been shortlisted for the 'Best Produced' Album in the UK Q Awards. This is voted on by a panel of experts or something, so fans are not able to make their voices heard on this one. Awards are announced this coming Monday the 21st. Info here.

...in the "unauthorized but apparently legal" dep't...
Well, it happens to a lot of bands, I guess it had to happen to Weezer sooner or later...the "unauthorized biography" CD. Its called "Maximum Weezer" and is coming out Oct 29th. Its even listed on amazon.com already. Whats on it? Is it any good? Who knows? We only know it claims to tell 'the weezer story', but who was checking the facts? Hard to say. Thats what "unauthorized" is all about.

"...it isn't very good. Also, it is read by 'some English lady' who I don't really think listens to the Weez. It comes with a crap mini-poster of the guys all lying down on a carpet...It lasts for 60 mins and there is nothing there that a boardie wouldn't really know already. The one topic I found interesting was when they talked about Rivers' leg operation to lengthen it...they didn't use any Weezer music or 'proper' interview material, so instead they have some annoying tune going on in the background for the whole CD and the few clips of Rivers talking is scratchy, possibly from a telephone call or radio broadcast." ---harrybb

"...Not saying the history of Weezer is boring (its anything but), but these discs are boring. ...I can't even laugh at the absurdity of this disc. You have to be a really hardcore fan to get into these discs...and if you're a hardcore Weezer fan, then you probably already know the history of the band..." ---Ryan

"...the content of the CD is fair at best. [the narrator] pronounces people's names strangely ...calling Rivers "Rivers Keeomo" and Spike Jonze "Spike Yonz"...throughout the whole CD there is an awful MIDI drum groove with a distorted guitar playing some generic shlock. The information is decent; they did their homework....Buy if you must." ---Barak

...Keep Fishin'...still rocking!...
The Keep Fishin' video is now #1 on College Television! This voter determined countdown is nationwide, and shows the song still has life for the nations students! 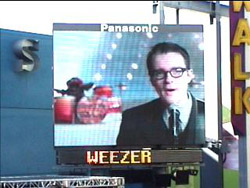