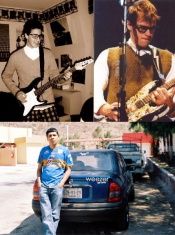 ...just a late October collection of smaller items for now. first up, check the media page sometime next week, as there will be something new (and extra cool) to look at soon.

...if you havent seen this great "Battle Of The Classic Album Covers" clip (a certain lead singer takes one for the team in it!), then you need to check it out. Whoever did this is genius.

...New Interview with Pat Wilson, mostly regarding his other band, The Special Goodness, and what to expect from it. (Interview also up on Digg.com).Thanks to interviewer Danyul Costin and Patrick Hefner of Independent Music Online.

...Here's a cool website exploring the many coincidences/similarities/etc between The Beach Boys and Weezer. (Some of these things he questions I do know the inside story on, but no one asked me!)

...sorry about the recent ugliness on the message board - these boards are supposed to be much harder to hack than regular boards, but it looks like someone got in and started a digital fire in the virtual club. Should be better now.

...theres a new "Weezine" in town, and this one is an online .pdf, filled with some pretty funny fan submitted 'fumetti' (photo captioned) comics of the weezer men, plus some other good stuff. Weezine Mk3 Volume 1 online here. Kudos to Mike.

...Looks like the "Factory Girl" film, which includes performance by Brian and Pat (as members of the Velvet Underground in about 1966) will be out in limited release on Dec. 29th, with a wider release in early 2007.

...Brian sighting? "I seen Brian a few weeks ago at Yucca & Cahuenga standing outside of his BMW filling it up with gas from a jerry can. He must have ran out." ---anonymous

...another fan site worth a fresh look is Richard V.'s "Weezer Collector". Aside from "Crooty" in Switzerland and myself, I don't know of anyone who has this extreme level of a weezer collection. Its fun to check out the pix and lists and learn about unusual stuff you may never have known existed.

...Weezer cover band Halloween Shows! The real weezer is still on Dagobah studying the ways of the Force (or something like that), but these cover bands will rock you with a clever weez-facsimilie.

Boston: "Morning Theft" will be covering weezer's blue album, start to finish, at TT The Bear's in Cambridge, Massachusetts. The show is on sunday, 10/29 and is 18+, $8. Their show last year in NYC sold out fast! "We'll be playing a set of our own songs, followed by our special Halloween set. We will dress up as Weezer and will perform the entire Blue album."

Minneapolis: "My Name Is Jonas" will be covering the entire Blue album at the Triple Rock Social Club in Minneapolis on October 31. This is part of a multi-cover band bill also including U2, Plasmatics, and Police cover bands. 21+/9pm/Cover TBA.

...todays photo is a collage - The Weezer-Mobile comes from Monterrey, Mexico, courtesy of weez fan Adrian G.C., who writes "My girlfriend took me this picture when we was in a road tttrip in Guanajuato, MX.I'm wearing a Tigres jersey, it's a mexican soccer team... My Weezer-Mobile it's a Chevy and I made 2 stickers, one with the name and other with the logo..." The other half is a Halloween "Rivers" sent in by Mcoco. Thanks!