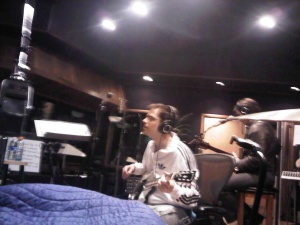 Today was weezer's 2nd day of rehearsals, getting sharp for this weekend's Voodoo fest in New Orleans and the Atlanta show at Chastain Park Amphitheater Live Nation (tix still available!) the next day. Also the guys are getting into the old songs, starting to get their Memories Tour setlists up to speed. That work will continue through November. Yesterday, 4 lucky winners got to come down and watch the guys at work for a while, while a film crew was on hand to document opart of the proceedings as well for a to be announced upcoming thang. Today's pic of Rivers at work on the Pinkerton track "Pink Triangle" courtesy Josh Freese!

...Reminder: we have added a show in Vail, Colorado, at the Snow Daze Festival on Sunday Dec 12!

...as you may have noticed, there's lots of new weezer music out now or about to be released - here's an overview of all the ordering and pre-ordering options available now: