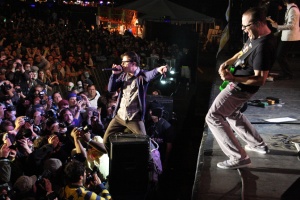 The gang has reformulated in Louisiana in New Orleans' French Quarter and now we are rolling over to the VooDoo Experience Festival in style. There are a ton of cool bands playing this festival over the 3 days in the weekend, but were not sure how many were going to be able to see till we get there.

The VooDoo Experience was quite an experience - perhaps inspired by the looming Halloween, or simply because of the wild energy of New Orleans, there were plenty of people in strange costume wandering about both in the audience and backstage. Another distinctive edge of this festival was the super tasty long line of food kiosks out in the middle grounds. All sorts of authentic New Orleans delights to choose from. Musically, there were a ton of bands, but we were mostly able to take in the Sigur Ros offshoot Jonsi, and a part of the Muse set that happened on the stage across the field from Weezer's stage, right after weezer's set. All in all it was a super fun night for sure, and Rivers scaled some heights, conquering yet another port-a-potty and some tall TV camera towers. A fitting end to weezer's run of festival appearances this year.

Did you go? Comment here and/or in our message boards, tell your tale! Post your show pix on our photo page!