"...i just got back from the paul mccartney concert at staples center tonight and guess what? scott walked right by me after the show! he was so cool. i called out "scott!" and he said hi and shook my hand and even waited for me to run and get a pen for a couple autographs! he signed a flyer from the concert and some random hot topic frequent buyer card i had in my wallet. haha it was awesome. this was espcially awesome after i sadly missed him on Love Line when i went to the kroq studio and not the Westwood 1 studio. anyways, scott rules!" ---andrew (primerib8)

"...last night I was thinking I'm going to write an email to weezer.com saying what a great website it is and so I ended up having a dream about weezer people. I travelled 4 hours to a house, I guess to meet rivers, but was denied entrance to the "family room" where fans were talking with him. Karl felt bad for me and said I could stay and watch a movie with him and some other people. Then people started to come out the room and I was scared that I was going to get yelled at for being there. One fan said it was because I didn't know what 1337 meant. (side note- I don't know where that came from) Another said I didn't post enough on the message boards. Then my brother came out and I was mad because I like weezer much more than he does. Then rivers came out and I was really scared and I left on my bike, but it started to rain, so I went back and rivers started to walk towards me (I figured to yell at me) and I woke up....I think I need help..." ---Lisa S. 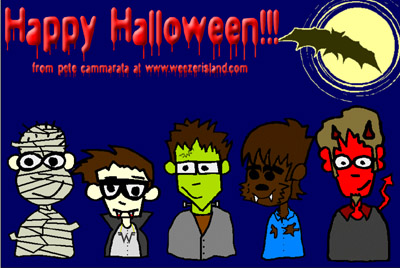