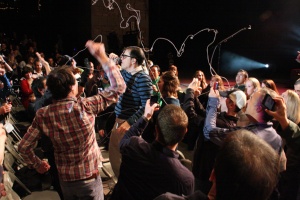 After a long overnight drive from New Orleans, we rolled into the ATL at about 7 AM. Some opted to scurry into the warmth and quiet of the hotel, others kept napping in their bus bunks, to wake up later already at the rather longish named Chastain Park Amphitheatre Live Nation. Soon we shall all reunite for the rock show. Opening up the show tonight is the raucous J. Roddy Walston and The Business! Come on down folks, its gonna be a blast!

It was later determined by informal popular vote that the actual name of tonights venue was the David T. Chastain Pre-memorial Amphitheater of the Alive Nation, for tonight at least. Hopefully for all time. Meanwhile, we got a cool surprise as Troy Sanders from the mighty band Mastodon came down to the show. He and Scott are bass budrows and Troy was hanging backstage pre-show and watching from the side during the show. J. Roddy Walston and The Business opened the show, and they were great!

The audience had a lot of excellent costumed freaks in it today, in honor of Halloween (Halloweez) weekend. Weezer didnt dress up, preferring to simply layer their clothes to stay warm during a rather chilly outdoor show. This show was a lot of fun, and several old school weezer songs saw the light of day for the first time in a long time, including "Tired Of Sex" and "You Gave Your Love To Me Softly". They also gave "Teenage Dirtbag" a whirl for the first time since Reading/Leeds, and for the second night in a row tried out the new Hurley track "Hang On", to great effect. During the show, Rivers made a lap of the amphitheater and the pied piper effect was in full swing as the children ran after him. He ended up in the merchandise booth in a witch hat.

Big ups to the cool folks in the surprise (to me) after-show gang, including OG fanclubber Farid #1293!

Did you go? Comment here and/or in our message boards, tell your tale! Post your show pix on our photo page!