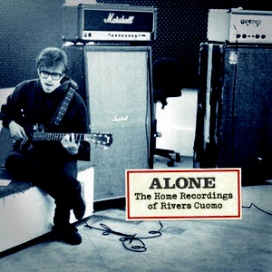 * UPDATE 11/22* As you can see, please note that Weezer and Geffen Records have no affiliation with www.albumsix.com. The new Weezer record is not called "Tout Ensemble" and there is no official release date yet for the album. Remember, when its on Weezer.com, its for sure. (Though I will say, "well played", to the authors of that site.)

...Folks, heads up: the label pushed the release date of "Alone" back one week to December 18. Still in time for the holidays! See above for the cover art, featuring a photo I took of Rivers in 1993 at work in a rehearsal studio. Rivers says "This is a CD of my favorite home demos from ’92 to ’07 featuring a lot of never heard before songs, a few covers, a few songs from my unfinished rock musical "Songs From The Black Hole" and my original demo for “Buddy Holly”". Please note that the final tracklisting of this album will not be released before the album itself. See some more info on this album and the upcoming 6th Weezer album on pp. 32 in Rolling Stone's 40th anniversary issue (see it for free online here).

...Okay, here's a round up of our man Scott Shriner's appearence at the recent "Office Convention" in Scranton, PA, celebrating both the NBC show 'The Office', and lovable Scranton. Scott was invited to guest with the Scrantones, the band responsible for the Office theme song. The Scrantones played in an outdoor booth on Friday, plus a Saturday night indoor gala show with many guests from the show showing off their (often considerable) music talent. Scott had a blast providing bass duties.

Scott says: "The setlist included some dusty classics, some oldies, a couple jazzy numbers and [the theme song and] some other music from the show like "the booze cruise" and stuff like that. Melora [aka Jan, the uptight corporate manager now fired and living with Michael Scott(Steve Carell)] has a cd she did, she's a great singer. And Craig (Darrell the warehouse guy) did Radiohead's "Creep" and Cameo's "Word Up" and "Crazy" by Gnarls Barkley. We also did a Police song with Brian [aka Kevin, the big accountant whos band on the show is a Police cover band]. [Bizarre, creepy on the show] Creed [actually the very nice real name Creed], was actually in the Grass Roots back in the late 60's so we did "Midnight Confessions" [which Creed originally played on, and was the Grass Roots' biggest hit]. We had to do the Pennsylvania Polka of course. All in all, about 20 songs. Wow..."

Others helping out onstage with Scott at one point or another were the actors who play Stanley, Toby, Angela, Meridith, Phyllis, Oscar, Andy, and Bob Vance.

There were several news stories on the Convention, but this one gets the link because it mentions Scott's contribution.

Photos: Here's Scott and Creed jamming it out. For more pix, including quite a few with Scott in them, see this Flickr gallery, and this one too.

*AND..! Michigan area folks - coming up next week on 11/30, Weezer tribute band "Our Name Is Jonas" is playing Andrew's Bar and Grille in Ypsilanti, MI.