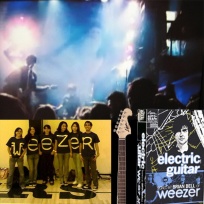 ...okay, if youre on the mailing list or are a weezer myspace friend, you already know, but to make sure, heres the deal - Target stores will be carrying an excusive Brian Bell Limited Edition guitar package, starting next Sunday, 11/26. The cool things you should know:
1. Brian has autographed every one of these guitars
2. The guitar is by Lyon, its a really cool color and is the same "strat" body style that Brian prefers to play.
3. The package includes more than the guitar - it comes in a collectable box and has a certficate of authenticity.
4. Its a nice guitar that had the Brian stamp of approval...
5. ...but its just $199.99!
6. SEE HERE for the details!

...speaking of Brian the film that he and Patrick Wilson are in has a trailer online at last. The film is called "Factory Girl" and takes place in 1966. Its about Edie Sedgwick, Andy Warhol and an Bob Dylan-like dude played by Anakin Skywalker - i mean Hayden Christensen! Pat and Brian are in a scene as John Cale and Lou Reed of the Velvet Underground. They are playing "Heroin", a V.U. song in the film, but they recorded their own new version of the song for the films soundtrack - so that's what you will hear as you see them perform (in character as the V.U.) in the film. Todays picture includes a still from their scene. out the trailer here.

...weezish sighting 1: a few days back on 11/18, on Good Morning America: "Coming in from commercial break GMA played clips of the "buddy holly" video and briefly discussed it in a "flashback 1994" segment. Highlights: the host going "i love me some weezer." and the co-hostess saying "12 years? feels like it was only 2 years ago!" they also mentioned "make believe" and flashed a picture of brian playing on the screen." ---alex =w= #175

...weezish sighting 2: Somewhere on the web coding reference site O'Reilly.com, is a humorous photo-cartoon that inexplicably mentions weezer. I believe the page is subscription only, so code folks: have a peek if youre looking for a laugh. Thanks to Kiel C. for the obscure find!

...todays photo (large size here) is a montage of a still from Factory Girl (barely) showing Brian and Pat in action (Pat is to the right - John Cale was not the drummer!), plus the new Brian Guitar in question and a photo from Allison from Orange County, CA. "We decided to spell out our favorite band for our senior panoramic picture."