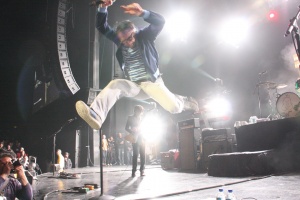 *Special Announcement* Contrary to whats been mentioned in some interviews and advertisements, the order of the sets at these Memories shows is: FIRST the greatest hits set, THEN the classic album set (i.e. blue or pinkerton).

On to night 2! A different set of hits, and then on to Pinkerton, in its entirety - for the first time ever!

Sweet Jumpin Christmas, as Luke Cage, Power Man used to say back in the day! I'd say we're on to something here. I dont think its really possible for me to describe just how fun and epic tonights show was. Suffice it to say it was an VERY intense experience. The hits set was mostly different from the Blue night and included b-sides which are rarely if ever played, as well as "Only In Dreams". Watching that one get played two nights in a row brought me right back to the setlists of 1994, when we toured in "The Enforcer" AKA "Betsy", our great yet problematic van.

Tonight I had the honor and privilege of accompanying Rivers on "Butterfly", playing the simple drum beat. Back when the song was recorded for Pinkerton, it was so late at night that only me and Rivers were still at the studio, so he asked me to run through it with him on the drum, using just a bass drum turned on its side and draped with a towel. As you can hear on the Pinkerton Deluxe Edition, he also cut the song with no drums, so it was a real honor for me that the drums version was picked for the original album. Then when we went out to tour Pinkerton in '96-'97, Rivers asked me to come out and do the drum part when he played Butterfly, and that had not happened again till now. So thank you Rivers for letting me do it again. (Catch some nice video of this performance over on whatosaw.com).
.
Big ups to everyone who came out, it really felt like a family affair, from the old school fans to the new to the crazy assortment of celebs who came to witness the special night of rock. Beth and Jorge reprised their singing assistance with style and panache. And a special weezer brotherhood shout out to Justin Fisher in the house - the Amherst House to be exact!

Tonight and every Memories show night, Brian is signing copies of his new CD by his other band The Relationship, up at the merch booths, right after weezer's performance.

Read the SPIN review of both L.A. Memories shows here.

Comment here if you went, or start a thread on our message boards, tell your tale!

...REMINDER: Here's a nice way to score some weezer goodies - go and download Gowalla at Gowalla.com for your smartphone - iPhone, Android, Blackberry, Palm, etc. Then use it to check-in at any Memories Tour date and get a free Weezer download, an exclusive Weezer badge, and connect with fellow weezer fans at the show!

...REMINDER: Weezer's all new online store is up now!