"The monkeys that were paired with fur-less surrogate mothers were very maladroit when mixed with monkeys raised by their real mothers." ---a psychology professor, yesterday 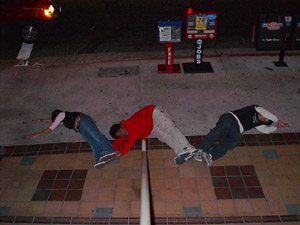 ...Michelle [gEEkLuvzRivers] and freinds get weezy, and weez park art by Chuckles...

...weez press:
In the new Spin mag [Jan '03], "Maladroit" is ranked #6 in their "Albums of the Year" list. "...At War with the d(emo)ns in his head, Rivers Cuomo seems determined to transform his once-cuddly band into metal maniacs. But look behind the beard: If Weezer is metal now, then the touching, hook-packed Maladroit is their Master of Muppets. Cuomo may be desperate to rock, but nobody's better at rocking desperately."

...the Pet Sounds radio show in Ireland is compiling a chart of the best albums of the year, and Maladroit is on the voting list. Just follow the instructions on the site to place your vote!

...The Canadian music magazine CHART is holding its annual online music poll. Check it out, weezer is nominated in the following categories:
- International Golden Toque Award (Best international album) - [for Maladroit]
- Blissful Noise Award (Best song) - [for Dope Nose]
- Thank you much-ly award (Best Video) - [for Keep Fishin]
The end results will be published in the print edition of the mag, to be released in January.

...VH1: On the recent "Top 20 Funny-Ass Videos" countdown, "Buddy Holly" was ranked at #4. "...I find this one really interesting cause the lead singer, Rivers, is a manic depressive, so it's kinda weird when he smiles in this video. Its funny this really personal, reserved guy does this wacky weird video." ---host Tom Arnold, spouting randomness

Keep Fishin' report:
USA: on Vh1, Keep Fishin #6 on the "Top 20 Pop-ups of '02" countdown show. Popups included "rivers cuomo came back from tour japan w/ two things: a suit, and an "enormous" beard.", "the director asked him to shave it off so he'd look younger.", and "props were waved next to the camera to make rivers smile"....
WHFS Baltimore/Washington DC held a Top 99 countdown this past weekend, "The 99 Artists that you are Most Thankful For". Weezer came in at 37. ...37? Meanwhile, on Denver Channel 93.3 The Adventure, Keep Fishin' ranked No. 1 on their Music Mafia Top 8!
Canada: Montreal's 99.9 The buzz is having a top 99 o' 2002. Both Dope Nose and Keep Fishin' are in the running with your online vote! Also Keep Fishin' was on MuchMusic's Much On Demand show recently, as well as both Say It Ain't So and Buddy Holly.
Germany: the track is played every sunday night in a club called "Mox" in Marburg. "the dj loves this song". Also, on a recent "Harald Schmidt Show" (where Weezer was at one time scheduled to play earlier this year) Host Harald Schmidt asked his assistant Manuel Andrack about his favorite bands. Manuel answered quickly: "Weezer ...and Ash!" [thanks to Tanja]
Australia: "Keep Fishin'" came in at Number 5 last week on the Triple-J Net 5O, its 10th week on the chart.
Philippines: Radio: getting played NU 107.5. Video: heavy play on "UNTV ch. 37" [as well as Dope Nose], "MYX" (a videoke channel), and LINK TV. The Keep Fishin' "Making The Video" show was shown on Solar
Entertainment Newtwork, titled "=w= tv". Its being played in 5 minute segments.
Ecuador: "Keep Fishin'" is at #10 on the top 20 countdown on Mtv!

The Lion And The Witch: where to look
- Hoodlum's at ASU in Tempe, AZ
- Manifest Discs and Tapes in Greenville, SC
- Uncle sams on South Beach, Miami
- CD World, Lawrence Township NJ [off of RTE 1 south near Princeton]

...this, that, other things

"Maladroit: I love all of Weezer's CD's. This one is alternative rock'n'roll and very original. It's good to dance to or just to listen to. It gives me a full adrenaline rush." ---"my favourite CD" by James Patterson, best selling thriller writer.

...weezer.meetup.com. VERY COOL! Check it out!

...This fan contest is underway, the rules having been set and one winner already announced.

..."Over the summer, I entered a contest co-sponsored by MTV and Spin magazine; my entry was a 500 word essay on my favorite band, which is of course Weezer. The prize was to be sent on a tour with the band Papa Roach (random; however, we got along well, because all the members of Papa Roach are huge Weezer fans!!) and then write an article about them for Spin, while MTV taped the entire thing. Well, I ended up winning and the show first aired last weekend on MTV and my article is featured in the current issue of Spin magazine. I just thought you might be interested to hear what one weezer fan is up to!" ---Dana V.

..."I was at the Guns N' Roses show last night in Columbus, Ohio. When they were setting up for GNR's set, the background music caught my attention. They played "December", which in and of itself is pretty awesome. THEN, they played "Take Control" and "Slave!" I'm not sure if they played anymore weez prior to Guns taking the stage, but I definitely heard those 3 songs. GNR loves the weez!" ---Jim T.