[another] letter o' the week!
"I met the love of my life on the message board. We've recently decided to get married. Everyone from weezer.com is invited, and we were wondering if you would attend. The wedding will take place at an old castle in Ireland. We would love for Ace to play.
We're trying to make it semi-gothic, so we're attaching wings to monkeys. After the ceremony, we will give ourselves to each other for all to see.
Thank you for your time.
Love,
Shampee and Trebled Won"

[also...]
"hello I like mucic very muts but you shout put some lyrisis on you site
greetz Theo (meppel Holland)" [Theo: lyrics are located here.] 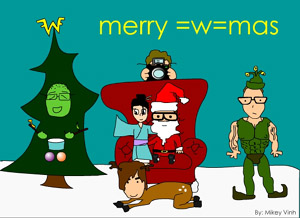 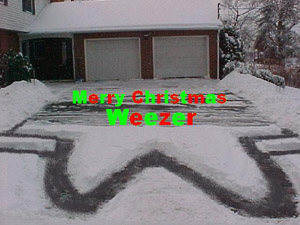 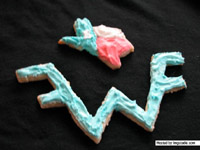 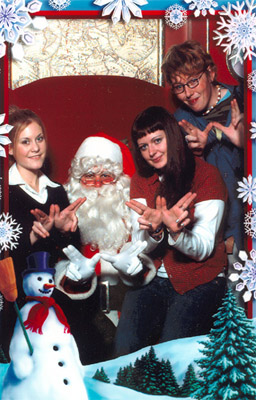 DVD update:
theres been a lot of questions about the in-progress weezer dvd recently. This is just a reminder that the dvd is mostly finished but a bunch of minor things have yet to be completed, like the clearences, menus and packaging stuff. The release date was pushed back to "early 2003" but there is so far no more detail to be had. So, no, its not available for the holidays. When progress is made and we have a release date, it will be posted here on the corner.

...Canadian fans: looking for the 2003 weezer calendar? In Toronto, they have been spied at Sunrise Records stores, such as the one in Eglinton Square.

...WPGU in Champaing Urbana Illinois has a nightly "Top 8 at 8" countdown, and Weezer has the record for most days at #1 with 56 days for Hash Pipe... Now Coldplay is catching up with 'Clocks'. Will they knock the weez out of that spot? Not if you can help it!

...Dont have the tab book for Maladroit, but want to know how to play Dope Nose? Its tabbed out in the latest issue of Guitar World [Mudvayne cover].

"...i'm proud to inform you that we are going to throw a Weezer tribute show here in Jakarta, Indonesia! the event is entitled "In The Garage: a Tribute to Weezer", and is due on December 29th. more that 20 bands will perform in that event, including several well-known local bands (who are Weezer-influenced, of course). here's the webpage, but it's not updated often....my band will participate in the audition for the event. the band audition will be held this Sunday, and word has it that more than 50 bands are already registered! only 20 will be selected and will perform on the event. the event's organizers said that from 20 bands that will perform there, they will pick 10 best bands to record their rendition of a weezer tune into an Indonesian Weezer tribute album! i really hope my band will get through the audition, and i will give you details about the show when it's time. rock on." ---yoga

"...Another boardie and I are working on this project "The Boardie Bio Website." It's basically gonna be a website for the weezer.com boardies to go to to learn about the other board members. The thread explains it in incredible detail, and also gives info on how to get in on it." ---Doug Aka Rupertpeasley

"...my brother and i live in utah and we have been going down to temple square in salt lake city for the past few christmas' to play guitar and sing on the sidewalk. we put our guitar case out for people to put money in. well, we discovered a very cool thing. we first went down last friday and we started playing christmas songs. we played about 3 or 4 christmas songs and for the first 15 minutes we made hardly any money. probably a few dollars or so. we realized people didnt really want to hear these because they were boring. so we decided to play weezer songs. we played "my name is jonas" first and it was like a miracle. people poured in the money. "jonas" made us around 15 bucks! for only one song! well, we knew we had found what people wanted to hear, and since i know every weezer album song we just kept on playing weezer. groups of teens would circle around us and would request weez songs. they would sing along also. it was awesome! we made around 150$ for the night. so thanks weezer. you are what people want to hear!" ---jake, ogden utah