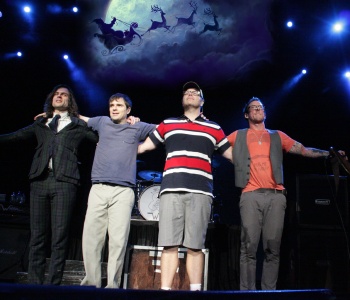 ...Hi folks- Hope you are having a great holiday season - Merry Christmas, Happy Holidays, Happy Chanukkah, Happy Kwaanza, or happy whatever works for ya.

Time sure does fly by when you are having fun. 2012 found us skipping to and fro, playing shows on cruise ships, in theaters, at festivals, state fairs, casinos and more. 2013 looks to be another fun year, as we do the Australasia Tour 2013 in Indonesia, New Zealand, and Australia in January, and we return to Japan in March. Beyond that is "TBA" for now but stay tuned for more info as we get into the new year. Rock is on the weezer docket, as always.

Fans have been asking me a lot about what to expect in terms of new releases and such in the new year, but right now I dont have a lot of hard data. While its impossible to say when the next weezer album will come out, rest assured the band is excited and united in their desire to make it great. Meanwhile the continuation of the DVD series is waiting in the wings for now, but will be back in production once some bigger schedule questions have been addressed. There will be plenty more live dvd's (like the Seattle one that was released a while back), as well as at least one massive collection of material so far uncollected on DVD - picking up where "Video Capture Device" left off, as well as delving back into the past for more lost treasures - live, studio, behind the scenes, etc. There are literally hundreds of hours of never released video footage that are being reviewed for possible use. While there is no date attached to the dvds at this point, they are coming - I just dont know when. In addition, there is a new book project in the works, just getting underway - details to come later.

Well, we hope your holidays are fun and peaceful, and a special holiday wish for peace and safety to those affected by the recent tragedies in NYC area and Newtown CT. Why does it seem like the only 'silent night' we got anymore is Christmas Eve? Here's to a safer, happier 2013...