Karl Koch graduated in the spring of 1991 from Maryland Institute, College Of Art in Baltimore MD and soon went out to LA in a 1988 Ford Bronco at the urging of his best friend Pat Finn. His parents (specifically his father) were a bit skeptical about his decision to move to LA. "I was introduced to Pat Wilson in Buffalo by Pat Finn, shortly before they took off to LA in early spring 1990. A year later, I followed them out there, and Pat [Finn] introduced me to Matt, Rivers and Jason. We lived in a cheap rather unpleasant apartment located on the ground floor of 1711 Stoner Avenue in West Los Angeles. Pat and Jason were very messy roommates. [Pat Finn] said, 'You gotta come out here man! Whatever you want to do, this is the place to do it!' I was like, 'Alright.' So I kinda packed up, against my parents' wishes." Koch's initial ideas for what he would do in Los Angeles included continuing his fine arts education at Cal Arts Valencia (plan abandoned after a breif visit to the Cal Arts campus), publishing a comic book that Pat Finn would write and Koch would illustrate (unfinished), and becoming a professional fine arts painter by setting up a studio in his apartment (a few new paintings made, but plan put on hold due to later Weezer activity).

At first, Koch didn't know anyone that would end up in Weezer, but eventually met the members through Pat Finn. Koch recalled an early memory of (former Weezer bassist) Matt Sharp as a sad guy wearing little round glasses, black turtlenecks, and new wave hair. This was in January 1991, 6 months before he moved to L.A., during a winter break California vacation. Pat Wilson, and Matt lived there, Pat [Finn] was staying there temporarily, and Rivers was about to move in. "It was a nice apartment [on Genesee St, just north of Beverly Blvd], but they couldn't afford anything. So [Matt would] sit on [cheap plastic] lawn furniture...and watch Woody Allen films."

Koch lived with a growing cast of characters at 1711 Stoner Avenue, and worked a warehouse job at REI in Torrance, CA (he and Pat Finn both found jobs there, and commuted for their roughly 30 hour a week schedules). Over the course of summer 1991, Koch witnessed the coalescing of Wilson, Finn, Jason Cropper, and Rivers into Sixty Wrong Sausages, who ended up having one show around Thanksgiving 1991 in Petaluma, CA, before breaking up. Over the winter of 1991-1992 the band that would become Weezer was born from demos and discussions of Wilson, Rivers and Cropper. Koch was very excited by the new early weezer songs and stepped in ready to help and document the band as he had with the short lived Sausages. Meanwhile the Stoner Apartment took on more and more people, including Bob Hnilo, Von Lono, and Takashi Hasegawa, a great guy from Japan that Rivers and Pat Finn met via Kyokushin Karate lessons in Burbank, CA. With 7 people sharing the $800 rent, they each paid $120 for several squalor filled months. In addition, an annoying girl from Holland named Antionique was somehow allowed to stay there for several weeks in the summer of 1991, as well as a several month long stay by Jesse Humphreys, a Northern California guy who Pat Finn had met through Jason Cropper.

In March 1992, while Rivers, Matt and Justin Fisher moved into 2226 Amherst Avenue (home of "The Garage" rehearsal space, The Kitchen Tapes demos, and the Say It Ain't So music video), Koch, Pat Finn and Takashi Hasegawa moved into The Fuller-Martel Plaza apartment complex on Sunset Boulevard in Hollywood, next door to the apartment that housed their friends in Wax (as well as future jackass members PJ Clapp (Johnny Knoxville), Handsome Jack, and Loomis). This apartment was known as The Blue Diamond Terrace. There, Koch took a second job as a clerk in the nearby Wherehouse music and video store, at the corner of Sunset Blvd and La Brea Avenue. At that job he allowed dangerous gang members to shoplift Rodney O / Joe Cooley and Dr Dre cassingles in order to preserve his own safety, and watched with amusement as opportunistic thieves constantly grabbed karaoke machines and ran out the door with them, causing the store manager to chase after them screaming bloody murder. He also met Catherine O'Hara, Ice Cube, Henry Rollins, and Brad Pitt there, all of whom came in as customers. Brad Pitt bought the Lynyrd Skynyrd box set, claiming his last copy had been stolen at a recent party. Koch did not know who it was until he saw "Bradley Pitt" on Pitt's check, about which he was required to call a bank to get cleared due to store policy, leading to an awkward moment.

At the Fuller apartment, which lasted from march 1992 till August 1993, Koch lived with Finn and Hasegawa, but they added a 4th roommate in an illegal loft that Koch built into the dining room area. The 4th roommate was Pat Finn's little brother Brendan, then Darrin Pfieffer (later of Goldfinger and CFNY.FM in Toronto), then Finn and Koch's best friend John Drenning, and finally Patrick Wilson with his then girlfriend (future wife) Jennifer Wright. As Weezer progressed and eventually locked in a record deal, both Finn and Drenning elected to move out of L.A., Hasegawa got another apartment, and Koch went to New York with Weezer to help out with the making of what would later be known as The Blue Album. The Fuller Martel apartment was no more.

After the Blue Album was made Koch moved into an apartment in Van Nuys with Rivers (and later Kevin Ridel) from January - May 1994. They moved in right when the 1994 Northridge Earthquake struck, but strangely their cheap apartment was undamaged and rated safe, and they simply had to endure as the power, water, gas and phone slowly got turned on over their first week in the new place, as well as long lines at the nearby damaged supermarkets. In this time period his role was cemented as guitar and backline tech, van driver, and general assistant for weezer. In May, Rivers completed his semester studying music at LAVC (across the street from the apartment), the Blue Album was finally released, and weezer hit the road at last.

Koch worked in these roles from 1994-2000, with a hiatus in 1998-99 when he did his best to continue the Weezer Fanclub, which had lost its founders, Mykel and Carli Allen, in a terrible car accident in July 1997. In early 2001, after the summer of 2000 where he learned to be a webmaster for the rapidly growing weezer.net/weezer.com, he became a full time webmaster plus road photographer and videographer, and all around archivist. His roles as guitar and backline tech were relegated to new staff. Since then, as weezer has gone through peoplds of touring, recording and hiatuses, Koch has continued in these roles and others, such as the creation of the Weezer DVD, some music videos, and contributing to a myriad of other weezer projects over the years.

In 2002 He released his first music album as Karlophone, and followed up with another album in 2007. As of 2011, he continues managing a consistent work load with Weezer projects, records more music for a 3rd karlophone album when he can, and still intends on getting back to fine art painting when he has time. 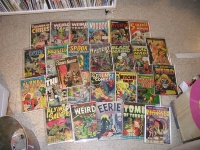 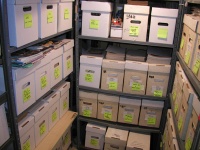 Koch has a healthy interest in film, comics, and of course, music. He's a huge fan of The Clash. "They always destroy me. I listened to them so many times between 13 and 18...thousands of times...too many times. They're just in my blood stream." Koch also enjoys DJ Shadow, James Brown, Jay-Z's American Gangster, The Beatles, Brian Wilson and The Beach Boys."

In a 2008 interview with Weezerpedia, Koch expressed interest in "Paper Planes" by M.I.A., The Bird and the Bee, Band of Horses, and The Shins. Still, Koch says he's always exploring the past. "90% of the new music I listen to is in the past. The best record is one that has some killer songs, but also something I can sample on it." 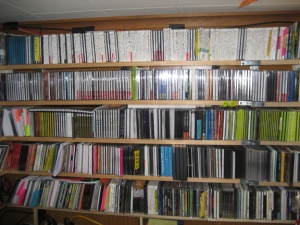 Koch recalls the band's primary interests revolving around the sub-pop grunge sound and the Red Hot Chili Peppers' funk sound. "I remember being in college...and we were like, 'Oh Mudhoney', but Nirvana was just another sub-pop band...who the hell knew what Nirvana was? Obviously, when Nevermind came out everyone took notice... It was kind of this realization that this is the sound. These guys The Pixies and Nirvana have it right."

He recalls that the night Weezer was signed was "chaos". I just remember this insane party. Todd, our guy, came over. It was just nuts. But that paled in comparison to the going away party." Koch was able to fly out to New York City with Weezer under the Geffen contract. In New York City, Koch documented the entire process of recording in video. Much of this material is viewable on the VCD. Early on, he served as the band's driver, transporting the boys around California for early shows in his large van, Betsy. He was also a defacto roadie.

Koch is considered by many to be the number one authority on all things Weezer. In addition to running Weezer's website, Koch posts daily updates in his own news feature called Karl's Corner. His production credits include the band's DVD, Video Capture Device and videos for "Pink Triangle", "Photograph", "Slob", the music video for The Special Goodness' "Life Goes By" of which Weezer's Pat Wilson is a member, the videos for "Blast Off!" and "Lover In The Snow" from Alone: The Home Recordings of Rivers Cuomo, and the video for "My Brain Is Working Overtime" from Alone II: The Home Recordings of Rivers Cuomo by Weezer frontman Rivers Cuomo. Koch offers a unique and less biased opinion than the members of Weezer. He occasionally posts on the Albumsix forums under the name Karlophone.

Koch has had in his possession one of the only full copies of the unreleased Weezer songs that were to be collaborated on Songs from the Black Hole (an album that Weezer fans have been hoping for the release of since it became known) and hundreds of other unreleased Weezer recordings. He is very involved with the band in other aspects.

Koch appears in Weezer's 2006 music video for "Perfect Situation" as well as the 1995 video for "Say It Ain't So." He is also credited as being 'Karl Koch' in the Pinkerton credits and for 'Rack Jobber' and 'photography' in The Red Album credits.

Koch has done guest spots on a handful of Weezer tracks, and was to play the role of M1 the robot on the scrapped Songs from the Black Hole album.

Koch's authority on all things Weezer has caused the fan base to coin the term "Karlification", a clever take on 'clarification'. Whenever the fans hear rumors or are unsure about certain 'facts' about the band, they will often email Koch or request his presence at message boards to clear the air.

Songs not on Albums

"If you think about my songs in terms of structure, they're kind of like pop songs...I want parts: A B, here's the bridge, back to A." Koch has expressed that he has a hard time working with other people, but has sometimes collaborated with Pat Wilson for Karlophone projects.

Megasnorkel interviewed Koch in St. Paul, MN on October 3, 2008. This is a video interview.

Four days later Ohjonas conducted an interview with Koch in Salt Lake City, Utah, on October 7, 2008. The audio-only interview was released as free podcast on iTunes.

Donny interviewed Koch in Cologne, Germany on October 16, 2017 while Weezer was on tour in Europe. The interview focuses on the period from 2009 up until Pacific Daydream.