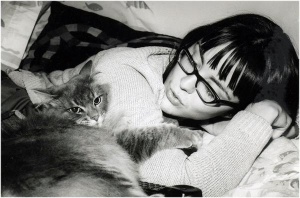 Leia Bell is the younger sister of Brian Bell. She currently resides in Utah and is a graphic designer.

"I began my art career in the mid-1980s by selling crayon sketches door-to-door to my neighbors in Tennessee. Sadly, I spent all of these profits on pop rocks and pixy stix, but I was not discouraged. When asked what I wanted to be when I grew up, the answer sometimes came back roller skating champion or Solid Gold Dancer, but somewhere thrown in on the side was always 'artist'.

"Years later, I moved from Tennessee to Utah. I learned how to snowboard (well, sort of), went to many rock shows, and spent a lot of time at the University of Utah taking classes in Photography and Printmaking.

"After graduating with a BFA in Printmaking in 2001, I really had no idea how I could ever use my fancy art degree until I started hanging out with Phil, the owner of the rock venue I frequented (it’s called Kilby Court, if you were wondering). He suggested that I screenprint posters for the venue-- small, colorful, eye-catching pieces that would also be collectible to the townsfolk. The plan seemed to work beautifully, for not long after I would hang up my posters, I’d walk back by the same spot and they would already be swiped. So then it began.

"Now, a few years later, Phil and I are a happy couple with three young sons (Cortez, Ivan and Oslo), an all-ages music venue, a printing studio, a wood shop, two dogs, an evil cat, a modest house, a few scattered ailanthus trees, and a soccermomish minivan all on the same street, Kilby Court." 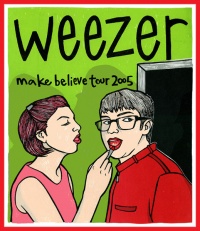 Leia has created posters for both Weezer, The Rentals, Matt Sharp, and several other notable acts. She also paints and designs T-Shirts, art prints, and illustrations.