This list is an attempt to document unused/older versions of changed/defunct/unreleased album information. Ever changing, as stuff may always be uncovered.

Some vinyl pressings do not have the feet cropped off.

Rivers supposedly considered naming the album several different things, such as "Diving in to the Wreck" and "Playboy". Album was originally intended to close with Longtime Sunshine but that was forgone in favor of Butterfly.

Songs from the Black Hole

The abandoned space opera we all know and love was originally actually conceived to be about a bar called "The Black Hole". Remnants from this era were documented in The Pinkerton Diaries.

Rivers Cuomo apparently recorded an entire album of material as Homie at Fort Apache Studios with Drew Parsons on bass and Fred Eltringham on drums in the fall of 1997.

Following Rivers' return to Los Angeles in early 1998, the band hired Mikey Welsh to take over bass duties for the recently departed Matt Sharp. Weezer spent the spring and summer developing and demoing more than 20 songs that Rivers had written since the fall of 1997, with the intent to finish an album by the end of the year. Weezer recorded a session at Mouse House Studios for their cover of Velouria, which also resulted in laying down tracks for Everyone and Trampoline. Much of this material was described as simple, riff-oriented, aggressive rock. Unable to settle on a direction, Weezer never moved out of the demo making process and Pat Wilson, fed up with the lack of progress, left LA. Rivers, Brian and Mikey played two cover shows as Goat Punishment before Rivers decided to isolate himself to focus on songwriting.

Had many, many, many different songs initially in the running. Had things gone a little differently in the studio, The Green Album could've actually been completely different in terms of what songs we have vs. don't than it is today.

Rivers allegedly had several different colors of the same picture, and it was originally intended to be the White Album, but he thought green stood out the most, and so we have The Green Album. 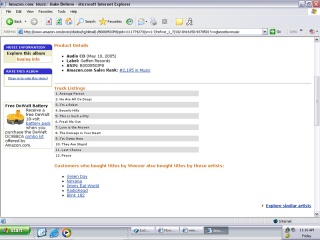 Amazon.com tracklisting of Make Believe as of March 25, 2005
Due to the ever changing tracklist, and the various songs from the entire 2002-2005 period, Make Believe also could've been completely different.

Tentative titles for the album were: One Thousand Soviet Children Marching Towards The Sun, Somnambulist's Dream, and Either Way I'm Fine.

At the Beverly Hills video shoot, Pat mentioned that both "Make Believe" and a self titled Red album were being considered. We know what happened.

An alternate tracklist posted to Amazon in late March of 2005 included the songs Average Person, I'm a Robot, Love Is The Answer, Outta Here, They Are Stupid and Last Chance and excluded Perfect Situation, Hold Me, Pardon Me, My Best Friend, The Other Way and Haunt You Every Day.

Allegedly, the title "The Pure Sounds of Weezer" was considered, but voted down by Scott Shriner. [1]

Jacknife Lee was initially the producer, but it's said he "Kind of stopped showing up to the sessions", so it's possible that Raditude could've been a much different album with his input, instead of the three or four other producers that ended up working on it.

Originally conceived as a self titled album. Other titles were considered.

According to Karl Koch in a 2017 interview, the entire track list was scrapped near the end of production, and quickly finished only a few weeks later. It’s unknown what this track list would have looked like.

Everything Will Be Alright in the End

One of what seems to be many concepts that were tried and eventually scrapped for album nine. Ecce Homo (translates from Latin to 'Behold the Man') was a concept album written entirely by Rivers (no cowrites.) It has been described as "Rivers' true burst of artistic inspiration" and was possibly made entirely for Cuomo himself with no intention of ever being released. The album contained fifteen songs that were split into three themes or sections by three different instrumental songs, one of which was The Waste Land. The three themes appeared to be Rivers' relationship with father and authority figures (Patriarchia,) women (Belladonna,) and with religion/God. The album seemed to focus mainly on Rivers' relationship with religion, as the cover was intended to be the painting that adorns the Everybody Needs Salvation fanclub single, with a foldout star map and a picture of the Tower of Babel on the inside. The inclusion of the Tower of Babel in the early artwork may suggest that the album focused on man's attempt to find God/inspiration on his own.

All the Cuomo only written songs on Everything Will Be Alright in the End were included in Ecce Homo's tracklisting, including the three parts of The Futurescope Trilogy. However the three sections of Futurescope were not together and were most likely originally intended to be three completely different songs. Apparently Anonymous had an entirely different intro section that was cut for Everything Will Be Alright in the End, and Return to Ithaka was titled Resurgam Fidei at the time which translates from Latin to "I will rise again faith/belief ". Everybody Needs Salvation was also included in the tracklisting. The version of The British Are Coming that was included on Ecce Homo was the "personal problems" version and is said to have contained a reference to Boba Fett. An unreleased song titled The Rules of Life was intended to be the second song on the album and discussed how society (and possibly religion) tells people they need to follow a very specific set of rules/morals to be successful in life, and yet how no one really does or needs to.

The tracklisting was said to be:

Gravity Will Bring You Down was said to contain references to The Hindenburg Disaster, including lyrics detailing little children screaming as they "watched their daddies burn alive". This song is also said to contain a downward choral section which simulated falling.

A Black album with an entirely different track list was completed in early 2018 prior to the success of Africa. Runner-Up and Midnight are the only songs known to be written for Black and not included on the album.