"Mykel and Carli" (originally known as "Please Pick Up the Phone" and "A Letter to Mykel and Carli (from a High School Friend)", is the first track from the deluxe edition of Weezer's self-titled debut album and is a b-side to "Undone".

"Mykel and Carli" was originally written as "Please Pick Up the Phone" in February of 1993. However, as Mykel and Carli Allan began to play a larger role in the band members' lives, Rivers decided it would be fit to write a song for them.

The sisters Allan revealed the story of the writing of the song to fans at an official fan club gathering in the summer of 1996 at the Pasadena, California home of two fans. Supposedly, the sisters received a brief call from Rivers asking them what high school they went to. As the Allan family was somewhat nomadic at times, they replied that they went to several different ones. He asked them to pick one, so they decided to mention Wilson High (located in Hacienda Heights, California). "Great", Rivers said, then abruptly hung up the phone. Okay, that was weird, they thought, but let it go. Minutes later, he called back, asking them to name a street they once lived on. "Eagle Court" was the reply. Another "Thanks", and dial tone. On it went for some time, with the sisters increasingly curious, yet Rivers refused to reveal his motives for the desired info.

He then wrote "To Mykel and Carli (From a High School Friend)". Rivers' demo of this track is circulating. It is slightly different from the final version, noteably featuring a banjo track.

Days later, Mykel and Carli were invited out to a gig the band had in Hollywood, which was normal. However, the band stressed that it was important to make sure to come to this particular show. During the set, the band debuted the reworked version of "Please Pick Up The Phone", now of course rewritten and renamed in honor of the band's biggest fans. There was reportedly not a dry eye among the sisters.

When the band began recording for The Blue Album, they worked extensively on "Mykel and Carli", but never felt satisfied with it. When the "Undone" single was released, the band re-recorded the song in a session with engineer Paul duGre. The other "Undone" B-sides, "Susanne" and "My Evaline", were also recorded during this session.

For years following the untimely passing of the sisters in the summer of 1997, rumors spread that they were hit by a school bus, hence the lyrics. However, the song was of course written and recorded well before this tragic event, and had nothing to do with the circumstances.

Weezer's tribute is not the first song to be written about the Allan sisters, nor would it be the last. A Los Angeles-based band called Black Market Flowers first wrote a song of their own called "Mykel and Carli". Friends of the sisters, and acquaintences of Weezer, they were asked to open the tribute/benefit show in honor of the sisters, headlined by Weezer, and also featuring that dog., at the Palace Theater in Hollywood, August 15, 1997. The benefit show was the last time "Mykel & Carli" was played live for many years, played solely by Rivers. "Mykel & Carli" was finally played again by the full band on January 20, 2012 during the first indoor show on the Weezer cruise.

The song's chorus of Hear You Me! not only provided the name for the 1997 tribute/benefit album in honor of the sisters (on which both Weezer's and Black Market Flowers' songs are featured), but inspired the song "Hear You Me" by Jimmy Eat World, which was featured on their successful Bleed American album in 2001.

Back in Wilson High
I had two best friends
They lived down the block
Where Eagle Ct. bends
'Til the school bus came
And took my friends away
Now I'm left alone at home
To sit and think all day 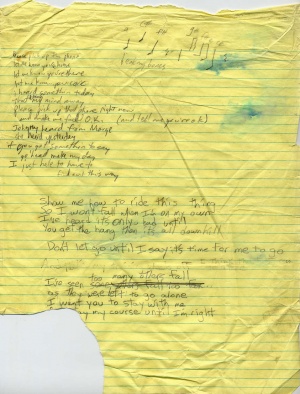 Handwritten lyrics for "Please Pick Up the Phone"

I've seen too many others fall
as they were left to go alone
I want you to stay with me
??? my course until I'm right