Return of the Rentals (for real)

Before the New Pornographers hogged indie supergroup honors, there was the Rentals 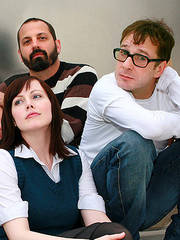 Like frontman Matt Sharp’s previous band Weezer, the Rentals’ hooky, big-brained
power pop has inspired a devoted legion of followers, grown-up alt-rock fans
willing to cut out of work early and drive three hours to a gig (they’ve got 44 of
them slated for summer and fall).

The band blew up in 1995 with “Friends of P” from their debut album, the archly
titled "Return of the Rentals." They disbanded after a follow-up album fizzled, but
the Los Angeles-based collective returns this year with the “Last Little Life” EP, the
group’s first material in eight years. The quick, four-song sampler takes Sharp’s
affection for boy-girl harmonies (featuring ex-that dog vocalist Rachel Haden) and
pads them with classic Rentals bells and whistles—Moogs, brass, strings, more
Moogs.

Sharp opened up about getting the bands back together—both the Rentals and,
surprisingly enough, a “Blue Album”-era Weezer.

I noticed that the Rentals are friends with Weezer on MySpace. Are you and Rivers Cuomo really still friends?
We don’t talk that often, but I spoke with him a couple days ago. We talked about personal stuff, just general catching up. The last time I had talked to him was at his wedding.

What was that like?
It was very hot in the 100-degree Malibu sun, which made suit wearing quite difficult. There were a lot of friends there who I hadn’t seen in a while. The original formation of Weezer attended: Rivers, Pat [Wilson], myself and Jason Cropper. We hadn’t been in a room together since the recording of the “Blue Album,” where Jason started the record with us and didn’t make it through. It was very strange.

As an obvious fan of analog synthesizers, did you cry the day synth pioneer Robert Moog died?
About 12 years ago, I had the honor of being on a group panel with him, along with Roger Manning and [Tim Gane] from Stereolab. I was certainly the least knowledgeable about the technology. Bob was a really nice and gentle guy.

How do you feel about playing at Disney World in your upcoming tour?
Playing where? Are we actually playing in there? I hadn’t heard that. Florida is an odd thing. I’ve done a great deal of touring, with Weezer and for the first Rentals albums, and I’ve only played there like once. It’s hard to even get booked in Florida, even when you want to play. Our show is very high-energy, so I plan for it to be very sticky.

On the 10th anniversary of the Rental’s first album release, you announced that you were getting the band back together. How did you handle this differently than Billy Corgan, who famously took out newspapers ads asking for his band back…to no avail in the case of James Iha and D’arcy?
There are many differences between the bands, like one: They are this massively successful, influential, katrillion-album selling rock 'n' roll band. And they had a core group of musicians. Our desire was to have a revolving door, where at any time one person could walk in and completely change the direction of the band. Iha is one incredible guitar player, and a really nice guy.

What does your new EP serve as in the larger recording process—maybe an amuse bouche for your forthcoming full-length release?
It’s pretty stand-alone. We recorded the songs at our friends’ tiny office studio in Hollywood and they were never originally intended to be released. These were home recordings that were made while we were thinking about making our next record. The material is part of our general search to find out where we are as a band. It was never supposed to be released and our friends put it out on their own label.