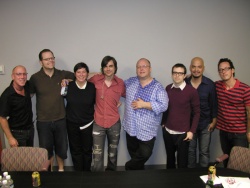 Weezer and the Pixies backstage at a concert in Montreal

The Pixies are one of the original alternative rock groups of the 80's.

Despite a short initial life span, and modest, if respectable, record sales, The Pixies have proven to be one of the most influential outfits on rock bands over the last twenty years. This is attributable to their unique style of music, a mix of punk and acoustic pop melodies, and often profound lyrics. Even if the Pixies were never a high successful band, their albums like Surfer Rosa or Doolittle are still some of the stylistic albums of indie music. Artists ranging from Nirvana to Weezer have cited the band as a primary influence.

After splitting up in 1993, the Pixies reunited in the mid-2000s, and have toured sporadically since.