Rivers Cuomo: 'There's So Much Pain in My Voice' 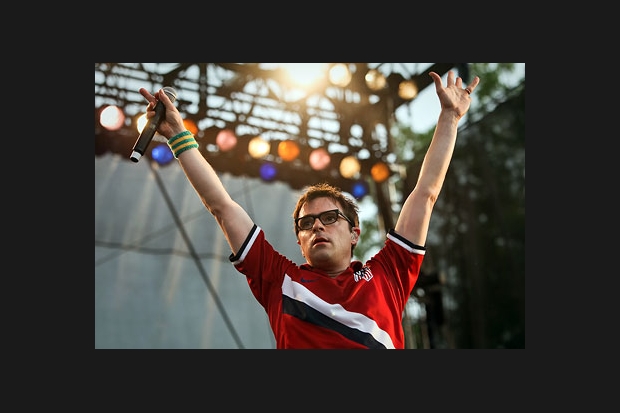 With the release of their latest studio record Hurley, a rarities collection titled Death to False Metal, plus a reissue of the classic album Pinkerton, Weezer have been everywhere this year.

Don't expect the deluge to let up anytime soon: The band is hitting the road for their Memories Tour on November 26, and frontman Rivers Cuomo is prepping four more volumes of his Alone demo series, a collaboration with indie-pop band Best Coast, and a book collecting his diaries from the Pinkerton era. Phew!

So how is Cuomo faring with the big workload? SPIN.com caught up with him to talk about how meditation has helped him write better songs, the revisionist response to Pinkerton, and why he's a fan of oversharing on sites like UStream.

SPIN: As you prepped the Pinkerton reissue and Death to False Metal rarities, was it difficult going back and listening to this older material?

Rivers: Well, generally I'm so excited about new stuff that at first it felt like a drag to spend a lot of my day working on old material again. But as soon as I got into it, it was amazingly fun. It just took me a second to shift gears.

SPIN: What were you most shocked to hear?

Rivers: I don't know if surprise is the right word but I was really touched by the emotion in my voice, especially with the Pinkerton songs. It struck me that there's so much sensitivity and pain in my voice.

SPIN: Do you think that quality has disappeared in recent years?

Rivers: I don't know. My voice, I think, has been pretty similar throughout my life. But yeah, little overtones - little changes in the weather are now reflected in my voice. I might be wrong, but on Pinkerton, it sounds like someone's been in a lot of physical pain for a good year or two. And that was exactly my situation.

SPIN: Pinkerton has been hailed as laying the groundwork for a lot of emo music this decade. Do you find any of those bands interesting?

Rivers: I don't know. I'm not familiar enough with emo to comment, really.

SPIN: Do you think it's a fair assessment?

Rivers: I feel like I've heard a lot of other musicians saying that they love Pinkerton, more so than other Weezer albums.

SPIN: Who were you most surprised to find was a Pinkerton fan?

Rivers: It's interesting because in 1996, when it was totally not cool to like the record, there was one musician who stood up and said they loved it. That was Russell Simmons from the Jon Spencer Blues Explosion. And that was totally shocking to me - they were like the coolest possible thing at the time. All year, that record had criticism heaped on it and to have one of the coolest musicians on the scene say he liked it - it was one faint glimmer of praise in a sea of criticism. It made me feel so good.

SPIN: How much Weezer material is left in the vault?

Rivers: Well, I'm releasing Alone 3 around December. I think I will release all my demos of solo and Weezer songs. There will be an Alone 4 and 5. Alone 6 will just be Rivers songs. And at that point I gotta stop. There are just little scraps left over after that. There's a huge mountain of half-finished Weezer songs, especially from 2000 until 2005. I wrote a lot of songs I didn't finish.

SPIN: Weezer are hitting the road for the Memories Tour, where you'll perform The Blue Album and Pinkerton in its entirety. Has there been any discussion of original bassist Matt Sharp joining you for some gigs?

Rivers: I think the idea came up, yeah.

Rivers: I think we left that idea behind pretty early on. I don't remember. I wasn't involved in the discussion so I don't know what the issues were.

SPIN: Later this year, you'll be publishing your journals dubbed The Pinkerton Diaries. What will the book look like?

Rivers: It'll come out together with Alone 3. It's at least 200 pages, there are some journals and emails and letters and articles I wrote and photos. There's also a lot of handwritten music, so fans can play it on piano and guitar and record it and put it up on YouTube.

Rivers: I have Facebook and Twitter and I spend a lot of time on Weezer.com now. My favorite thing is UStream. I turn it on in my dressing room every night and thousands of fans can watch us do vocal warm-ups or brushing our teeth and stuff like that. You can say it's oversharing but it makes it more fun to think there's an audience there. If it isn't entertaining for you, just change the channel.

SPIN: Nineties bands like Pavement and Soundgarden have capitalized on their break ups by hitting the road for reunion tours. Are you bummed Weezer didn't take a similar path?

Rivers: Well, I feel like we kind of experienced the phenomenon after Pinkerton. We weren't able to make another record for five years. We weren't doing shows or interviews. We'd fallen off the face of the earth. It felt like demand started to grow. We've never broken up, but some of these songs from our first two records we haven't played in years. I'm feeling that pent up demand again - our fans wanting to revisit those first two records in their entirety. Like it's 1995 or '96. It's exciting.

SPIN: Do you still practice meditation?

Rivers: Yeah, I meditate two hours a day and every year I do one big long meditation course. I love it and I'm really into it.

SPIN: How has it shaped your approach to songwriting?

Rivers: It makes me feel less methodical when I'm writing.

Rivers: I create less by rote and I'm wanting to be more spontaneous and explore and do things in a different way each time. I can also concentrate longer and not get discouraged.

SPIN: We asked a few Weezer fans to Tweet questions for you. Are you down to answer a couple?

SPIN: One reader wanted to know whatever happened to your cover of Kermit the Frog's "Rainbow Connection," which you recorded for the project Muppets Remastered.

Rivers: I have no idea what happened to that, actually. We did it and turned it in but haven't heard a thing about it.

SPIN: Another reader wanted to know why you chose to support British soccer team Sheffield FC.

Rivers: Well, Weezer was playing a show in Sheffield - I can't remember if it was someone from the record company or a promoter that took me to the game. But it was my first soccer match in the U.K. and it was a wonderful environment. They gave me a shirt with my name on it. I've been a fan ever since.