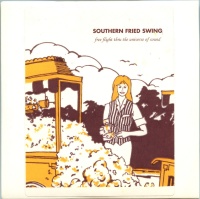 The group's debut album, Free Flight Thru the Universe of Sound

Southern Fried Swing began in 1992, when Wilson and Koch (occasionally joined by friend Pat Finn) would record countless songs while touring with Weezer throughout the '90s. These recordings were often done in hotel rooms and on buses, whilst also utilizing low-quality beginner keyboards acquired from thrift stores, Salvation Armys, and Radio Shacks. This combination of weirdness and low-quality equipment made for incredibly strange, yet unique songs.

The group has only one full release to date, Free Flight Thru the Universe of Sound, released through Koch's record label, Amorphous Records, in 2003. It was sold as a handmade CD and was limited to only 111 copies. Along with this album was a single released on the group's Amorphous Records page (and later their MySpace page), "Angel Wings".

There is a significant amount of unreleased material from the band, detailed on the Amorphous Records website and mentioned by Koch, which could likely have made up a second Southern Fried Swing album. However, no such album has been released.

Three well-known rules govern the actions and mythos of the band. These rules are as follows:[citation needed]

In a post on AllThingsWeezer made on July 9, 2014, Koch teases numerous Southern Fried Swing songs which the group "[sings often], but they arent on tape... yet".[2]