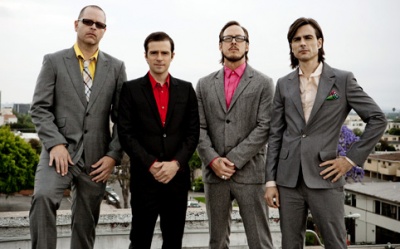 The Icons of a Generation Return to Their Roots:
Signing to Epitaph, Creating Hurley and Re-Issuing Pinkerton with Weezer

Los Angeles, CA -- After 18 years of performing, they are a band whose musical repertoire precedes them. With a career as old as a high school senior, Weezer scripts lyrics infused with bouts of social awkwardness, pipe dream fantasies of grandeur and the slew of sensations conceived by falling for girls across crowded rooms. From The Blue Album (1994) to Raditude (2009), Weezer’s strides have never been linear in design. They have went from power pop to rough and murky, then back again.

They have taken hits of critical failure and relished in supreme retrospective accolade. They have been in full swing and they have been on hiatus. Hell - they have even worked with Lil’ Wayne.

The truth is, over the years, Weezer has become somewhat of a nebulous band, taking shape, then reshaping with every cutting swerve drilled in their career path. With recent confirmation of a September 14 release date for their upcoming album, Hurley, and their decision to sign with Epitaph Records, who knows what kind of tracks will line Weezer’s eighth studio full-length.

“We like to not put limits on ourselves, but we already made the new record, which is pretty straight-ahead aggressive. It’s sort of, I want to say Indie-rock, but maybe that’s the wrong term because Indie-rock means something else these days. It’s kind of punk, actually,” explained guitarist Brian Bell. “I’m not at liberty to say much about it, but I said a lot right there. It’s aggressive and more punk. It’s something you have never heard yet.”

With Raditude, Weezer packaged a multi-faceted album in a light we had never seen them stand in before. By linking their sound with mainstream names such as Lil’ Wayne, Jermaine Dupri and Dr. Luke, they ventured from the reliance of their own talents and layered the stylings of a miscellany of musical genres.

“Well, the Lil’ Wayne thing was a necessity that came out of the songwriting process of needing something different for the third verse. It was the suggestion of the main songwriter, who was actually Jermaine Dupri. He suggested that we try it, and that’s how that happened, kind of a decision on the fly. I don’t know how it was decided with Dr. Luke, but it was. And we did it and it was all good. It was a good experience,” said Bell.

After producing a more do-it-yourself demeanor on previous projects, many felt that Weezer’s collaboration choices reflected the image of a band of “sell outs”. Having felt the wrath of potent criticisms in the past, it is no surprise that they discussed the possibility of bantering backlash prior to the album’s release. “I did have a conversation with Rivers about it. And he said, to put my mind at ease, that this is just one album out of many more that we are going to make in our career. When I heard that, I was like, okay, cool, well that’s a great way to think of it. We’re just trying something and this is just one record out of many more. When I heard that, I was fine with it,” explained Bell. 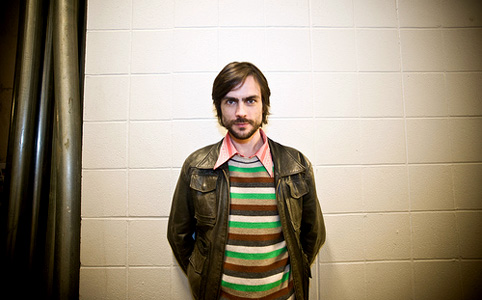 Brian Bell on Pinkerton Re-issue: “I don’t know much about the decision of why that was made, but I think throughout the years, Pinkerton has become an emo classic, if not started the whole emo genre, I hate to be so bold. It is very possible that we will do a Pinkerton tour this year. That’ll be exciting.”

In the minds of many Weezer fans, however, there is one release that transcends the label of being “just one record out of many more”, and that album is Pinkerton (1996), the so-called gun shot that kick-started a new age of music. It is the one record that constantly finds it way onto the inspiration list of all musical descendants creating alternative, indie rock albums of their own. Because of its current adulation, some wonder if Weezer will ever surpass the worship of Pinkerton with a new compilation of songs.

“Well first of all, the album is great. Secondly, it captures a moment in time that people identified with. They might have been in high school at the time, or college, or however old they were, and it was one of the best times of their lives. That was the soundtrack of their lives and they remember that. Now, it’s a new day and age and any kind of music is not going to have that effect on them. I think it has more to do with the people that heard it at that time, than us, because if you listen, there’s a lot of really good music we’ve put out since then,” Bell continued. “What we’re doing presently is our best. I really am enjoying the new record.”

Weezer may not be looking to create a second Pinkerton, but they will be re- releasing a deluxe version of the original in October of this year. “I don’t know much about the decision of why that was made, but I think throughout the years, Pinkerton has become an emo classic, if not started the whole emo genre, I hate to be so bold. It is very possible that we will do a Pinkerton tour this year. That’ll be exciting,” disclosed Bell.

“Expect a really high-energy good time, that’s for sure. There’s no telling what might happen. Rivers is quite the front man, as it is, very unpredictable,” said Bell. Whether you are hoping to hear “El Scorcho”, “Across the Sea” or “Falling For You”, chances are you envision them pouring out from behind Rivers’ black, thick-rimmed glasses. He is the frontman and undoubtedly the face of Weezer in many aspects.

“It’s always been Rivers in glasses, that’s been a thing, it’s an image that we’ve created. That’s what you want, you want people to have an identity with the name,” said Bell.

Claiming to be content with a more background role in the band, Bell appreciates his role as guitarist, background vocalist and co-writer to some of the tracks throughout the band’s discography. These include “We Are All on Drugs” and “This Is Such A Pity” off of their 2005 release, Make Believe, although all of the songwriting is credited to Rivers.