The Love I'm Searching For

"The Love I'm Searching For" is the first track on the Rentals' debut album, Return of the Rentals.

Two early versions exist in circulation. One demo version labeled the "alternate version" (possibly a demo) was released on the Rentals Fan Club compilation Excellent Stocking Stuffer. Another "alternate" version, featuring a slower tempo and recorded during the For The Ladies sessions at Poop Alley Studios, appeared on some single releases of "Friends of P." and was also released online in 2005. Both versions contain some minor lyrical differences. 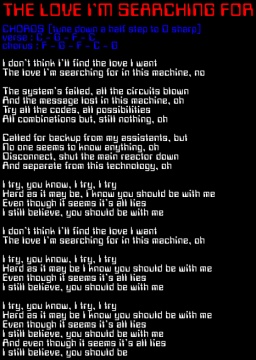 I don't think I'll find the love I want
The love I'm searching for in this machine, no

The system's failed, all the circuits blown
And the message lost in this machine, oh
Try all the codes, all possibilities
All combinations but, still nothing, oh

Called for backup from my assistants, but
No one seems to know anything, oh
Disconnect, shut the main reactor down
And separate from this technology, oh