Tokyo Police Club formed in 2005. They began receiving attention a year later with the release of two EP's, A Lesson In Crimeand Smith, and a popular single, "Your English is Good." Their first proper album release came in 2008 with Elephant Shell, which included singles "Tessellate," "In a Cave," and "Your English is Good." "Champ" followed in 2010.

The band covered "Friends of P." for 2008's Friends of P - Tribute to the Rentals. In the same year, the band toured with Weezer on the Troublemaker Tour. The band thanked Weezer for "letting us come on this tour" at several shows, even though they were often performing for a small portion of the audience that would arrive that night. At one Los Angeles-area show, lead singer David Monks brought out a camera and took a picture of the fans. Guitarist Josh Hook was brought on stage toward the end of Weezer's set to play "Troublemaker" with them at a few shows. They played their "Friends of P." cover on the last night of that show. 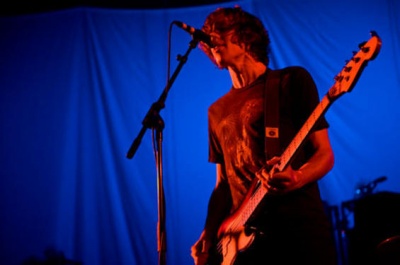