"Two to Tango" (sometimes written as "2-2-Tango") is a song written by Rivers Cuomo. The Catalog of Riffs lists a version written in 1991 (labeled as a "prototype") and then a second version dated January 3, 1992.

The song originated in November, 1991 as a "prototype" version, and a more finalized demo was recorded in January, 1992. Both versions of the song were considered a part of The 50 Song Project collaboration between Cuomo and Pat Wilson. The 1991 prototype was released online in November of 2020 as a part of the Alone V: Before Weezer digital compilation. Before this, only handwritten lyrics uploaded by Cuomo himself were available. According to the Recording History, the song was rehearsed by Weezer in February of 1992 and played live, acoustically, at the 8121 Club on April 7 of the same year. 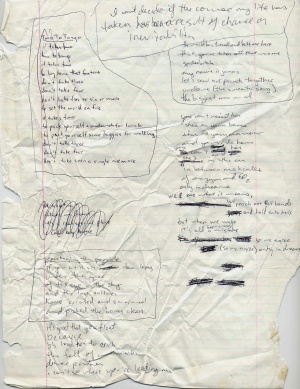 So listen right here now
This part's supposed to be half-time
In the future if this song's ever played this part should be half-time and that should be good
Like that, okay?

You're not old
Something complete
So secure
If you're not sure